Generation of singlet oxygen by irradiation

What is the mechanism involved in the generation of singlet oxygen when ground state triplet oxygen is irradiated in the presence of rose bengal?

Rose bengal (pictured below) is a member of the fluorescein family. 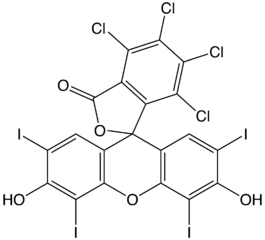 There are 3 steps in the process where rose bengal sensitizes the formation of singlet oxygen..

Although the question is about Rose Bengal the mechanism is quite general and is the basis for the first steps in photodynamic therapy as used to attempt cure certain cancers. The answer given by @ron shows the three possible steps in producing excited singlet oxygen molecules. The first condition for reaction is that the triplet of the excited dye molecule is above the energy of the oxygen $\Delta E > 0$ in figure. This is often the case, but not for molecules such as carotenes ( xanthophylls ) which have low lying excited state and so do not undergo these reactions. They are used by photosynthetic organisms to prevent reactive oxygen molecules from doing damage, but in photodynamic therapy we want reaction.

As two triplet states collide in solution and react the total angular momentum for the complexes formed must be conserved and can have quintet, triplet or singlet character but with a different probability for each type. The total spin on each molecule 1 is S$_1$ =1 and similarly for molecules 2, thus the total spin for two molecules is found from the (Clebsch-Gordon)series |S$_1$+S$_2$| ..|S$_1$-S$_2$| with each term separated by unity. Thus the terms give total spin 2, 1, 0 with multiplicities (2S+1) of 5, 3 and 1, or quintets, triplets and singlets, making 9 types of complexes all together. Thus quintets are formed with 5/9 probability, triplets with 3/9 and singlets with 1/9.

If $^3M$ is the excited triplet state of the molecule, and $^1M_0$ the ground state, the schemes for these types of quenching are

The last equation does not occur as it is not possible to form products from a quintet complex as each orbital in M or O$_2$ can have a maximum of only 2 electrons.

Thus both $^1\Delta$ and $^1\Sigma$ excited state can be produced, with total probability of 3/9 of collisions and the process is by energy transfer of the Dexter or exchange type rather than by the Forster of dipole-dipole type.

In solution the $^1\Sigma$ excited state has a shortish lifetime (many nanoseconds) relative to the $^1\Delta$ which is longer lived. Both lifetimes depend heavily on the solvent used. This triplet to singlet intersystem crossing (in O$_2$) occurs under the influence of solvent collisions causing spin-orbit coupling. The scheme below shows the energy levels.

Not the answer you're looking for? Browse other questions tagged physical-chemistry photochemistry or ask your own question.

4
What does the negative superscript in the term symbol for ground state Oxygen stand for?
4
Is a triplet state or singlet state more stable?
8
A unique demo for singlet oxygen?
11
Oxidation of guanine with singlet oxygen
4
Spin interaction term for a two-particle system of fermions with a potential that contains spin-spin interaction