Do hybrid orbitals exist in unbonded molecules? What would they look like?

For example, the ground state of a neutral carbon atom could be notated as:

But how should the electrons in the $\ce{p}$ orbitals be distributed?

I think in the end result a neutral carbon atom is either shaped in a trigonal-planar arrangement or a linear arrangement.

So do hybrid orbitals exist in unbonded molecules? What would they look like?

I think this would have interesting results for collisions between atoms and how probable certain reactions are.

Some schools or textbooks teach that in order for a reaction to occur energy is required to 'promote' electrons into hybrid orbitals to create some sort of excited atom prior to bonding. This does not happen in real life and is not a useful way of looking at bonding. What does happen is that as atoms approach each other, their atomic orbitals start to overlap significantly, giving rise to a new set of molecular orbitals (in quantum mechanics you are changing the potential in which the electrons reside and so the allowed energy states change). If the electrons in the new molecular orbitals are lower in energy than in the atomic orbitals then the reaction will proceed.

As for the electron distribution of atoms - it is spherically symmetric. The two $\ce{2p}$ electrons will reside in different orbitals because this does not require pairing of their spins (which is a higher energy state). However, it is meaningless to ask which $\ce{p}$ orbital they are in because all three orbitals are degenerate and so are indistinguishable.

The answer from a physically point of view is unambiguous. With the help of the mathematics for spherical harmonics and in the limitation of the Cartesian coordinate system the shapes of the probability to find the electron in some volume around the nucleus (with some percentage of say 90%] are computated for the p-subshells of the Neon- and respectively Argon-elements as follows: 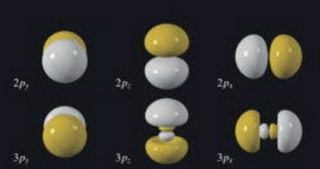 Despite their name, spherical harmonics take their simplest form in Cartesian coordinates, where they can be defined as homogeneous polynomials of degree l in (x,y,z) that obey Laplace's equation. (Wikipedia)

So according the quote from Wikipedia some other solutions in noncarthesian coordinates should exist. In the German version of WP some forms are outlined, of which the lower left might be of interest: 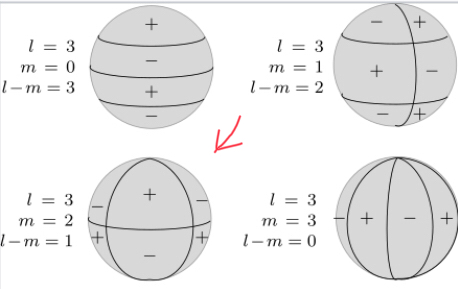 There are 8 volumes computed, all of the same symmetricity to the center of the sphere, 4 with a sign “+” and 4 with a sign “-“. Isn’t that a closer solution to the $sp^{x}$ hybridizations? The sign shows the direction of both the electrons magnetic dipole moments and the electrons spin. The electrons of the noble gases Ne and Ar are in a perfect equilibration of their 8 electrons of the “$sp^{3}$” shells. It is obvious that such a solution doesn’t correspond with the founded solutions in the scientific literature and we have to reject this solution.

Your question, how the electrons of single atoms are distributed around the nucleus is only of theoretical interest. Has anyone ever measured the shape of single atoms respectively the indisturbed outer electrons from these atoms? A the end you are interested in the electron distribution of molecules. From the form of the lattice one could conclude about the electron distribution for molecules and from this knowledge one can predict the existence and compound structure of new molecules.

With this in mind the above working assumption (Arbeitshypothese) about noble gas configuration with 4 (spin up) + 4 (spin down) perfectly balanced electrons on the edges of a cube has some advantages. A good example is the crystal structures of cubic lattices. Diamond as a form of carbon has this lattice too: 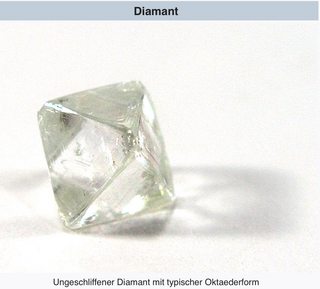 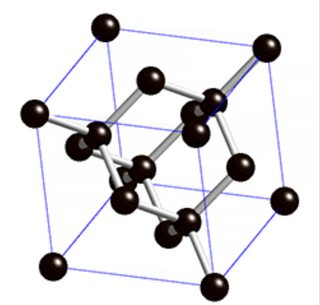 Simply take the $sp^{x}$- hybridization as the standard AND imagine the molecules you are interested in as compounds between their atoms with electron configurations of filled cubes for each atom. Take for example the Noble gas compounds. For some the imagination about cubic - or octahedral (which is the same, see Platonic solides) - distribution works perfect and for others such model doesn’t fit the founded geometries: 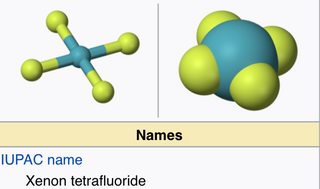 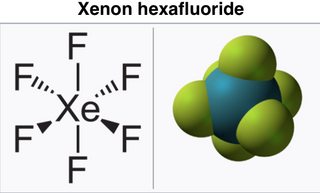 I think in the end result a neutral carbon atom is either shaped in a trigonal-planar arrangement or a linear arrangement.

So do hybrid orbitals exist in unbonded molecules? What would they look like?

I think this would have interesting results for collisions between atoms and how probable certain reactions are.

If you want to go in the direction of a scientist this could be your area of work. The question is a astonishing good.

Not the answer you're looking for? Browse other questions tagged atoms orbitals hybridization or ask your own question.

2
Do atoms exist in hybrid form in nature, or do they form hybrid orbitals during molecule formation?

9
Why an asymmetric geometry with sp3d and sp3d3 hybridization?
9
Is the hybridization only related to atomic orbitals but not to the molecular orbitals?
0
What are the height and width of the large and small nodes of the sp3 hybridized orbitals of carbon and silicon?
7
How are the hybrid orbitals of sulfur hexafluoride shaped?
4
Can orbitals in atoms be compressed?
2
What are the molecular orbitals shaped like in diberyllium (mono)cation?
1
Electron configuration of non-hybridized carbon
7
Why do sp³ orbitals have tetrahedral symmetry when they are linear combinations of orbitals with octahedral symmetry?