Ask Question
Asked 3 years, 7 months ago
Active 2 years, 5 months ago
Viewed 12k times
2
$\begingroup$
This question already has answers here:
Why is SiO2 a solid while CO2 is a gas? (5 answers)
Closed 3 years ago.

why does SiO2 form a crystal structure while CO2 forms a linear one? Would it be possible to make a CO2 crystal or SiO2 gas in a lab or is there something preventing that from happening.

$\ce{SiO2}$ forms a tetrahedral covalently bonded network , while $\ce{CO2}$ is a strictly molecular compound that forms double bonds between carbon and oxygen. This is because Si is in the next period, so it has 3p orbitals instead of 2p orbitals. Orbitals of a higher shell (greater principal quantum number) are physically bigger, but oxygen still has smaller 2p orbitals, therefore there is less overlap between silicon and oxygen’s p orbitals than there is between oxygen and carbon’s p orbitals. This makes a Si-O π bond much higher in energy, so it does not form. Instead, only a lower energy tetrahedral network of σ bond forms, giving us silica as we know it. This explains why $\ce{SiO2}$ cannot form double-bonded molecules like $\ce{CO2}$. Also, single Si-O bonds are especially stable (466 kJ mol-1) and short. This is attributed to the overlap between oxygen’s p orbitals and silicon’s empty d orbitals. Additionally, silicon is a larger atom than carbon, so the bonding electron pair repulsion between the oxygens bonded to silicon in SiO2 is much lower than what would occur if such a tetrahedrally coordinated CO2 network could exist. Silica’s behaviour can, thus, be explained by enthalpy, MO theory and VSPER.

Crystal $\ce{CO2}$ can definitely be made in a lab, and it is known as dry ice. $\ce{CO2}$ freezes at -56 °C. It boils at -78 °C and you will often see this temperature written under arrows in synthesis because dry ice is the most common method of carrying out reactions at such a low temperature. At atmospheric pressure, the dry ice crystal structure does not, however, resemble network covalent silica, but some high-pressure solid $\ce{CO2}$ phases have network covalent structures. Here is a phase diagram: 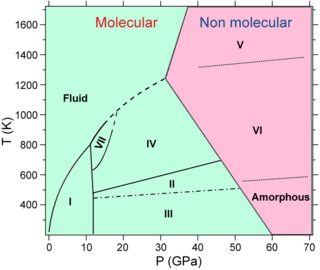 Phase I $\ce{CO2}$, shown in the bottom-left corner, is the most common dry ice crystal structure, and it is molecular, exhibiting a face-centered cubic arrangement with respect to the carbon. The high-pressure Phase V $\ce{CO2}$ (top-right), on the other hand, has a "partially collapsed cristobalite" structure. Isostructural with one of silica's polymorphs, it is non-molecular.

As for gas-phase $\ce{SiO2}$, it would certainly be hard to make, as it boils at close to 3000 °C, presumably for the bond-stability reasons listed above. I haven't read amy literature about its gas-phase structure, but I assume it would be similar to that of $\ce{CO2}$ but extremely unstable.

4
Allotropy and polymorphism
28
Why does pyrite form cubic crystals?
16
Why is SiO2 a solid while CO2 is a gas?
3
Why some compounds form different crystal structure at different temperature?
1
Would a melted crystal recrystallize back into the same lattice structure when frozen?
14
How sure can we be about the structure of purine?
5
Why do noble metals like silver not form natural cubic crystals?
2
What is the crystal structure of Calcium Acetate?