Can atoms delocalize in molecules?

It seems to me that any such effect would be most pronounced with very small atoms such as hydrogen.

Furthermore, I would expect such effects to be mostly to occur with hydrogen bonds and cation-pi interactions.

One possibility I am imagining sticking the ends of a bunch of linear molecules that end in OH groups or fluorine atoms together.

If it happens at all, it exceedingly rare. Through my 10-years work in chemistry, I didn't once found a case where it may be relevant. However, what does and indeed affect chemistry is reversible rearrangements.

The simplest case is rotation of molecules around single bonds. Another one is nitrogen inversion. More complex cases also exist. Such things sometimes make interpretation of NMR quite difficult. NMR gives a peak for each non-equal nucleus in the molecule. When internal rearrangement is involved, it sometimes makes two atoms 'equal', i.e. exchanging places too fast for NMR to catch the difference and producing a single peak instead. This, however, is 'quasi-delocalisation', since there is no need in resorting to delocalisation to explain said phenomena.

Delocalization is a wave property. The less mass objects have, the more they behave like waves and the less like particles. Electrons are, by mass, 1837 times lighter than protons, so the wave character of an atomic nucleus is significantly less pronounced and usually of no consequence.

The wave character of nuclei and even bigger objects has been proven, though: see, for example, the experiments of Arndt et al. with $C_{60}$: http://www.nature.com/cgi-taf/DynaPage.taf?file=/nature/journal/v401/n6754/full/401680a0_fs.html&content_filetype=PDF

If what you suggest were commonplace then it would be difficult to decide what a molecule is as its structure may consist of innumerable forms. Thus x-ray crystallography would not produce a structure and nmr spectra would most likely be uninterpretable. As this is not generally the case there cannot be many (possibly any?) examples of these that do not involve H (or D) atoms.

One normally considers the ammonia inversion as H atoms tunnelling, but what about the rapid inversion ($10^{8}$ s$^{-1}$) of, for example the bowl shaped molecule corrannulene(C$_{20}$H$_{10}$ see below and web molecule-viewer.com for rotatable picture of 3D structure). Presumably corrannulene does not tunnel from one bowl shaped form to another as its mass is so great, but crosses the inversion barrier top due to thermal energy excitation. Similarly, rotation of alkyl groups in their rotational potential is thermally activated.

The important point is that there is always a competition between tunnelling and barrier crossing. All atoms can tunnel, light ones more easily than heavy ones but usually heavy atom tunnelling cannot compete with thermal barrier crossing and is not observed. 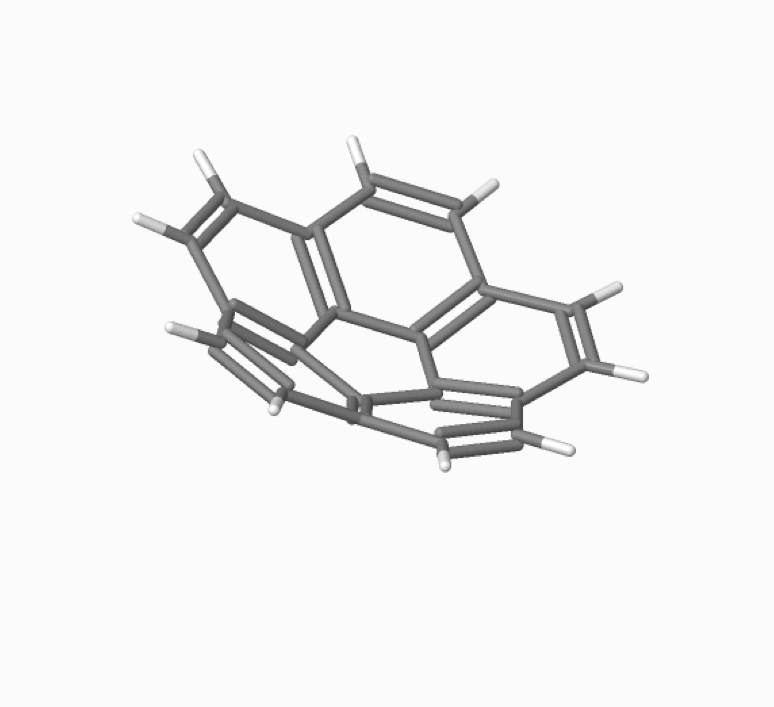 Other tunnelling examples are tautomers shown on the Wikipedia page and involve hydrogen. If tautomerism occurs in the gas phase then we should probably assume that its due to tunnelling of the H atom, but in solution it may be a different H atom that leaves and returns. Another example is the H bond, such as in the structure of DNA where the H atom can move between two other atoms (O..H..N and N..H..N) or a suggested by @Zubo .

5
Can a polymer have different resonance structures?
8
Can we break the covalent bonds of water molecules using resonance frequencies?
3
Why can't oxalate ion donate two pairs of electrons from the two double-bonded oxygen atoms
1
Can this sp2 lone pair resonate?
3
Why does delocalization (only) occur in molecules represented by resonance hybrids?