Devise syntheses of the following three compounds, starting in each case with any alkene that contains four carbons or fewer. You do not have to write mechanisms, although at this point it may be very helpful for you to do so.

This is the question I'm trying to tackle. I'm having a bit of trouble with the third part of it, which is the synthesis of butan-2-ol. The text solutions says that I should use but-2-ene, which I can understand but I don't quite understand why my answer is also not plausible. Can someone help me out with this? 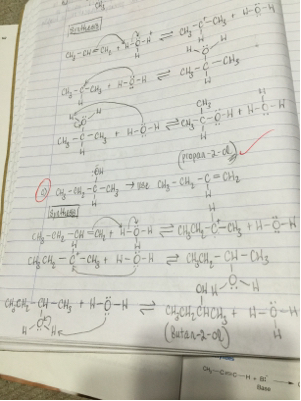 You propose to use but-1-ene rather than but-2-ene as a starting material to synthesise butan-2-ol via addition of water to the double bond. There is no reason why it would not happen the way you drew.

However, using but-2-ene allows only one possible reaction pathway. With the relatively high symmetry of the molecule ($C_\mathrm{2h}$, assuming trans), attacking either side of the double bond will lead to an identical product: The molecule’s intrinsic $C_2$ axis will transform one into the other. Thus, it is only possible to generate butan-2-ol.

Starting from but-1-ene, you have two non-equivalent first steps, generating either the primary or the secondary carbocation. These obviously cannot be transformed into each other by symmetry (the alkene’s symmetry is now $C_\mathrm{s}$). Thus, you will get a side product: butan-1-ol. These products will be difficult to separate. If anything, careful distillation would do the job.

As RobChem already noted in the comments, (organic) chemists typically attempt to avoid side reactions and different products, hence why the book suggests using the more symmetric alkene.

Not the answer you're looking for? Browse other questions tagged organic-chemistry reaction-mechanism synthesis alcohols or ask your own question.

3
Acid-Catalyzed Hydration
3
Bromination Pathways with alkane, alkene, and alkyne substrates
2
Understanding the hybridization of cyclohexane?
4
How does one properly do this alkali melt? (Pfleger's indigo synthesis)
10
Reaction mechanism for the synthesis of 9,10-phenanthrenequinone
9
How to make cyclohex-4-ene-1,2-diol from cyclohexa-1,4-diene?