What is a process for the extraction of urea from urine? These are the steps I have come up with:

Then, I assume that the water layer remaining contains mostly urea. However, how do I get rid of everything else (urobilin, etc.)?

The end goal is to generate ammonia from the urea by adding some calcium hydroxide. However, it would also be nice to get rid of other impurities which do not impede this reaction.

Urine color is generally a result of the degradation of the heme molecule from blood into the urinary products, called bilirubin, urobilinogen, urochrome, urobilin and uroerythrin. In essence, they are all tetrapyrroles amounting to something on the order of 1mg per 100ml (or roughly 0.001% of urine)... so this is a very minor part of urine. Also, it should be noted that over 3,000 chemicals have been found in urine, so there's something to consider.

Activated carbon filtration might be able to be used to preferentially remove the tetrapyrroles and some other organic molecules while allowing urea to pass (for the most part). 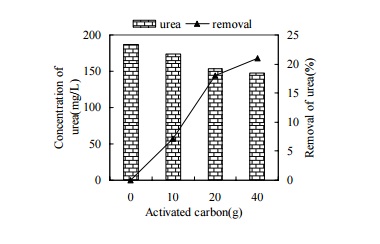 But I think that the first thing to do is deal with the concentration. Urea is only about 0.93% of urine. So you only have about 0.93g urea per 100ml of urine.

To concentrate urea: boil off the water (which will also kill bacteria). Urea doesn't boil. The melting point for pure urea is 132.7 °C and urea will begin to decompose at around 150 °C. The residue (which should look creamy) will have a relatively high urea concentration which can then be extracted with (warm/hot 60 °C) ethanol or diacetone alcohol. Salt and protein are significantly less soluble in alcohol(s), so they should hopefully be (mostly) removed at this step.

The solubility of urea in 95% alcohol (100 g/L), absolute ethanol (50 g/L), and methanol (166 g/L) at 20 °C (room temperature) sounds pretty fair. And from TECHNICAL MEMORANDUM No. 13/M/67 (Investigations of Crystal Modification of Urea) "in the case of diacetone alcohol the solubility [of urea] ranged from 2 per cent at 20 °C to about 10 per cent at 100 °C, offering possible development of a process yielding free-flowing crystalline urea."

Now, the solubility of a hodgepodge of stuff including tetrapyrroles is something that you will have to experiment with. But, many similar compounds are readily soluble in acetone and tetrachloroethylene (often had as brake cleaner). Urea should not be highly soluble in these two solvents, but I'm a afraid I can't find a reliable solubility listed online, and I happen to be out of acetone right now. Cleaning an alcoholic extract of boiled urine with tetrachloroethylene might require using a separatory funnel.

On a historical note, (around 1727) Herman Boerhaave was able to extract urea from urine by working with the concentated-by-boiling residue (having the consistency of "fresh cream"). After filter pressing the residue, he allowed it to dry for a year... until he obtained a solid mass with an unknown oily substance (on top). He discarded the oil and rinsed the crystals (filtride) with cold water to remove salt, leaving urea. He then recrystallized the urea from hot water. Previously (in 1669), Hennig Brand discovered the philosophers stone (phosphorus) by cooking the bejeezus out of (lots of) urine.

Personally, instead of waiting a year, I would take a chance on extracting urea from the cream. Also, I read today that boiling urine causes irreparable stink-damage to a home; so get a hot plate and an exension cord and boil it outside. Another recipe (as if I had nitric acid to spare), calls for reacting concentrated urea (say 100g in 100ml water) to make urea nitrate. The addition of nitric acid is exothermic and urea nitrate is explosive, so make sure the solution doesn't boil off (ice bath)... and urea nitrate is precipitated in the freezer. Then after you have clean urea nitrate, you can neutralize the acid under alcohol to recover urea. I would reserve this (nitric acid) method for the final work up, using relatively clean urea.

Also, here's a couple of pay-walled articles that might be useful to you if you really want to do this: Solubility of urea in water-alcohol mixtures and Urea in the history of organic chemistry: Isolation from natural sources

Urea is soluble in alcohol and methanol while the salt isn’t, so you simply boil the urine to reduce its volume, add methanol, separate the methanol layer, add $\ce{NaOH}$ and a bit of $\ce{H2SO4}$ or $\ce{HCl}$ and evaporate the solvent. There should be urea pure enough for anything you want to do …

Not the answer you're looking for? Browse other questions tagged home-experiment purification extraction or ask your own question.

21
67 failures at extracting acetaminophen from Excedrin(R)
2
Extracting Zinc (oxide) from baby powder
2
Extracting silver from Tollens test
1
Removal of water from sulfuric acid
1
Extracting herbs with grape juice
2
How to calculate the concentration of a monoprotic organic acid that was extracted into an ethyl ether layer?
3
Extracting iron oxide from ceramics waste
0
Unknown salt formed from electrolysis of urine
0
Extracting other mineral from salt in evaporated seawater