Dissociation of HCl in aqueous solution

My question is regarding $\ce{HCl}$. In my book it states that:

Why does this dissociation actually occur scientifically? What causes the $\ce{H}$ to leave its electron behind to the $\ce{Cl}$ and form the hydronium ion? Why does water ($\ce{H2O}$) take the additional $\ce{H}$ ion? What is the general concept here in dissociation? Electronegativity?

Water is a polar species in which the oxygen atom in $\ce{H2O}$ has a partial negative charge and the two hydrogen atoms have partial positive charges. As you suggested, this is because oxygen is highly electronegative (i.e. it has a high affinity for electrons) and so the negative electrons tend to have a higher density around the oxygen atom than the hydrogen atoms, creating this separation of charges due to water's molecular structure. Take a look at the molecular structure of water, which can be shown below. It has an asymmetry bent geometry and therefore the charge distribution in water is also not symmetric.

The hydrogen in $\ce{HCl}$ does not actually give its electron to the chlorine atom. Rather, the more electronegative chlorine ion is attracted to the partially positive hydrogen atoms in water, and the hydrogen ion in $\ce{HCl}$ is attracted to the partially negative oxygen atom in water. This separates the $\ce{H+}$ from the $\ce{Cl-}$ in $\ce{HCl}$ so that the acid dissociates into its respective ions. You therefore get the equation $\ce{HCl -> H+ + Cl-}$ when in water. If you include water on the reactant side, it can be equivalently written as $\ce{HCl + H2O -> H3O+ + Cl-}$. Here, $\ce{H3O+}$ is simply indicating that the $\ce{H+}$ ion is in an aqueous solution. 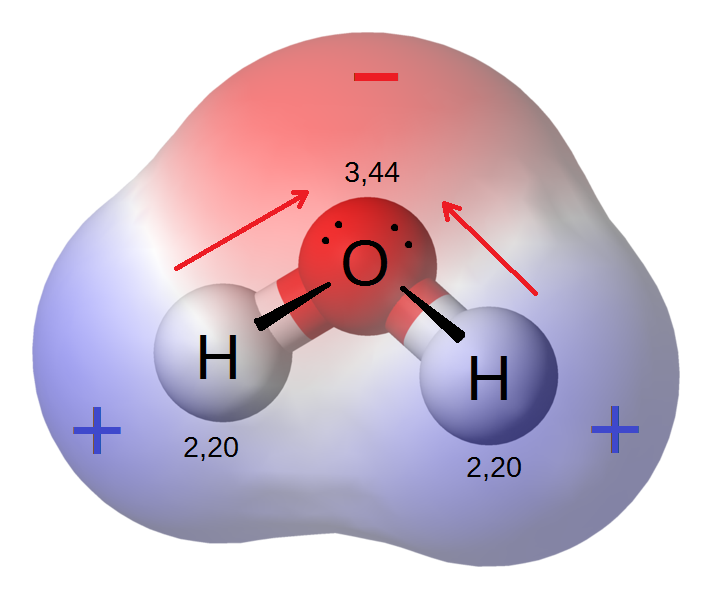 The water molecule has a 3D structure based on a $\ce{AX2E2}$, which transforms into $\ce{AX3E1}$ for the oxonium ion (refer to Gillespie's VSEPR theory). Water has a two symmetry planes, one containing both hydrogen atoms and the tilted plane where those two atoms face each other, with in the intersection the axis permitting a Debye dipole moment of $P = \pu{6.2e-30 C m}$ or circa $\pu{1.85 D}.$ The compounds with partially ionic bounds, such as $\ce{H-Cl}$, for which the $\ce{Cl}$ atom is much more electronegative than the hydrogen atom, can be considered as a three step process:

I enclose a simple model to explain this with hands...

Not the answer you're looking for? Browse other questions tagged inorganic-chemistry acid-base bond or ask your own question.

0
Why does the hydrogen atom in HCl (when dissociated in water) bond to the oxygen rather than staying with the chlorine atom?

3
Reversibility of an acid's reaction with water depending on its strength
8
Can “Common Ion Effect” suppress the dissociation of water molecules in acidulated water?
3
Is there also a leveling effect for weak acids in water?
2
Aqueous copper and how it reacts with NH3
3
Can acid-base reactions occur in a non-aqueous medium?