Is glass an amorphous solid or supercooled liquid?

You are correct: it's not both.

Why? What you've heard is nonsense. Very old window panes are thicker towards one side because of how they were made at the time. It became common practise to put the thicker edge at the bottom, because it was less likely to exceed the acceptable stress on the thinner area.

Contemporary windows have been found with the thicker edge to one side, or even the top. Gravity on Earth has been consistently towards the core since at least the Middle Ages, so the "flowing glass" hypothesis is false.

Glass is an amorphous solid by definition (per Karl's comment) and is not a super-cooled liquid (per Prabhdeep Singh's comment).

I'll focus on the phase of the glass, since it seems there is some confusion in the comments (and the other answer). In glass forming systems, as you drop the temperature below the crystal phase melting temperature, one would expect to nucleate the crystal phase. For various reasons this does not happen. Instead, the liquid continues to cool, and the viscosity continues to increase as one might expect upon cooling. Below a critical point, the glass transition temperature, the viscosity rapidly increases by several orders of magnitude. Atomic mobilities are now so low that crystallization cannot occur. Furthermore, the viscosity is so high that the material is a 'solid' in common usage - all the atoms are frozen in place.

So, what is this 'solid'? Well, it isn't the stable crystal phase - you can tell that by x-ray diffraction. True, it is not 'liquid' in the common sense of flowing like water. But, two things point to it actually still being in the liquid phase.

Second, the other indication of a phase change would be, of course, a signature of latent heat in calorimetry. Again, as you cool the liquid down to the glass formation temperature (and beyond), there is no latent heat measured. There is no first order phase transition. There is only the glass transition where the visocity increases.

Taken together, a glass is a configurationally (kinetically) frozen liquid. It has the structure of the liquid, and it does not have a first order phase transition to the liquid. I do not see how one could consider it anything but a super-cooled liquid.

To further emphasize - a super-cooled liquid is one below the melting point of the crystal phase that has not nucleated the stable crystal phase. Nothing says that the liquid viscosity can not get so high as to be considered 'solid'.

This is dependent on temperature, but before I go into that, we need to understand what a solid and liquid are as that is where mush of the misinformation comes from. A liquid is defined as:

a nearly incompressible fluid that conforms to the shape of its container but retains a (nearly) constant volume independent of pressure.

Note a liquid is NOT defined as the lack of a crystal structure, but as being a fluid (Fluid: a substance that has no fixed shape and yields easily to external pressure; a gas or (especially) a liquid.) . A solid is defined by:

structural rigidity and resistance to changes of shape or volume. Unlike liquid, a solid object does not flow to take on the shape of its container, nor does it expand to fill the entire volume available to it like a gas does.

This should make the question rather simple -- at ambient temperatures, its a solid, but then some people try to proliferate the myth that glass can flow over extended time scales and thus technically a liquid. This is just that, a myth, and is patently false. If you were to measure any flow of glass over as much time as the universe has existed, there would not be a change large enough to detect. Contrast that to something that is indisputably solid and certainly not fluid but still "flows" -- metals. Yes metals exhibit deformation due to creep when heated above a certain temperature and subjected to stress. Despite this deformation, and the fact that metals soften at high temperature, no one is arguing that metals are crystalline liquids nor does anyone argue that metal powders are liquids. Thus again glass is a solid at ambient temperature.

Given glass does not have an abrupt transition from liquid to solid such as with metals, but rather a continuously thickening viscosity, there are a few values glass scientists use to characterize a glass and that one might consider the glass to finally be a liquid. For our stringent definition of a liquid, the strain point where no more strain can be introduced into the hot glass making is a good demarcation as to below what temperature glass is definitively solid. 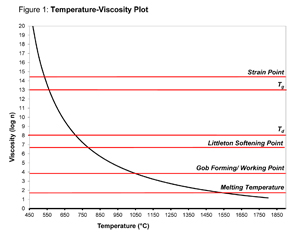 I think the thicker bottoms could be due to a phenomenon known creep (the internal flow of molecules under stress and over time). Amorphous materials below their glass transition temperatures show no molecular chain mobility, yet under a constant stress (gravity) and a very very long time (700,1000) years some very, very slow creep motion increases the volume at the bottom of the glass and thins it towards the rest of the body and in direction to the top.

Not the answer you're looking for? Browse other questions tagged physical-chemistry phase glass or ask your own question.

6
Super-cooled liquids
7
What is the difference between an amorphous solid and glass?
0
How do I select a sub-freezing temperature for my experiment that will allow the formation of frost, but not supercooled liquid water (rime)
2
Use a solid or liquid stationary phase in gas chromatography
1
when using glass to glass stoppers, is it best to have them dry or use lubricant?