Why does clearance increase after phenytoin overdose?

I am finding it hard to envision how an overdose of phenytoin ultimately leads to an increase of the clearance of phenytoin after the enzymes that metabolize phenytoin stop getting saturated.

I know it has to do with zero order and first order kinetics, but I just can't put it in perspective.

Would appreciate if someone could help out.

Phenytoin is primarily eliminated by hepatic metabolism (>95%). Hepatic metabolism is mainly via the CYP2C9 enzyme system with a smaller amount metabolized by CYP2C19. About 5% of a phenytoin dose is recovered in the urine as unchanged drug. Phenytoin follows Michaelis-Menten or saturable pharmacokinetics.

This is the type of nonlinear pharmacokinetics that occurs when the number of drug molecules overwhelms or saturates the enzyme’s ability to metabolize the drug. When this occurs, steady-state drug serum concentrations increase in a disproportionate manner after a dosage increase: 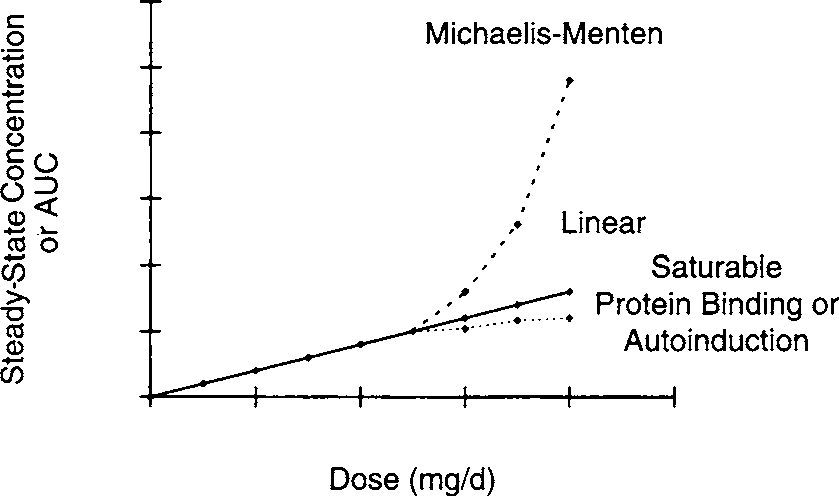 For drugs such as phenytoin with a low hepatic extraction ratio (≤30%), the numeric value of liver blood flow is much greater than the product of unbound fraction of drug in the blood and the intrinsic clearance of the compound (LBF >> fB)

Plasma protein binding displacement drug interactions cause major pharmacokinetic alterations but are not clinically significant because the pharmacologic effect of the drug does not change.

Because the clearance of the drug is

dependent on the fraction of unbound drug in the blood and intrinsic clearance for a low hepatic extraction ratio agent, a decrease in plasma protein binding and increase in unbound fraction will increase clearance.

Currently there is no substantive evidence of phenytoin auto-inducing its own metabolism (the theory of phenytoin displacing itself from plasma proteins really isn’t convincing at all but perhaps in a drug interaction with a drug which is predominantly plasma bound). The reason being that the information regarding phenytoin auto-induction is sparse and conflicting. The results of this study aren’t convincing enough when taken in perspective of its ability to auto-induce itself after an overdose.

Not the answer you're looking for? Browse other questions tagged drugs pharmacology or ask your own question.

17
Why does the sulfone ring in tazobactam open when the lactam is hydrolyzed?
2
Does isotretinoin affects contraception hormonal pills - Ethinylestradiolum, Drospirenonum
2
Why does lactulose turn dark?
21
Why formulate drugs as HCl salts when HCl is in stomach acid?
0
Why is the effect of competitive antagonist less than the effect of non-competetive antagonists?
7
How does Rosuvastatin 5 S-lactone form in human body?
0
Does an airborne chemical stimulant exist?
1
How does gefitinib affect the EGFR(ecptor) and why is there relapse