The short answer is stated on the Wikipedia page for trigonal bipyramidal:

… there is no geometrical arrangement with five terminal atoms in equivalent positions.

This website from the School of Mathematics and Statistics at UNSW explains why distributing points on a sphere is tough and that perfect distribution is possible only in certain cases $(n=1,2,4,6,8,12,\&\ 20)$. These cases have been known for a long time — they correspond to the platonic solids (plus a point and a line segment). Even trigonal planar does not represent an even distribution on the sphere.

Trigonal bipyamidal then just happens to be the minimum energy conformation. The repulsive interactions between the chlorine atoms cannot be optimized but they can be minimized. 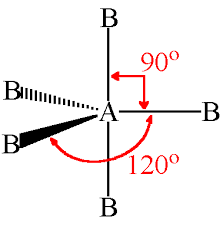 The geometry of $sp^3d" hybridisation, i.e: trigonal bipyramidal happens because of unequal hybridization of atomic orbitals.

This is why you have two set of distances in $PCl_5$. This is NOT true when there are more than 1 atom except for one specific case which I will add to the answer if requested (did not add it here to avoid complication since the OP appears to be new to the topic)

54
Why does F replace the axial bond in PCl5?