I think zeolites possess acid sites that are catalytically active in many hydrocarbon reactions. The pore system only allows molecules that are small enough to enter, hence it affects the selectivity of reactions by excluding both the participation and formation of molecules that are too large for the pores. Is that right or not ?

Alumina containing zeolites have composition that can be represented as

where M is metal ion with m charge, and so on, respectively. Meaning you have $[SiO_4]^{4-}$ and $[AlO_4]^{5-}$ tetrahedra which make up negatively charged framework. Positive ions compensate for this negative charge. There is a rule from 1954. called Löwenstein rule, which states that x/y has to be less than 1, which in turn implies there are no Al-O-Al bonds, as two tetrahedra have Al atoms in their tetrahedral positions. This gives really great internal specific area and resistance to high temperature, which makes this type of zeolite a great candidate for catalysis (heterogenous). The following picture nicely represents the active sites in zeolites - they act as molecular sieves, as only the specific molecules fit in the pores: 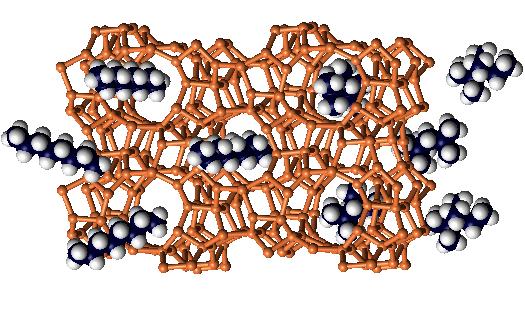 Not the answer you're looking for? Browse other questions tagged homework kinetics catalysis surface-chemistry or ask your own question.

1
Reasons which explain why the efficiency of a reaction increases as the average rate decreases?
4
Can anyone explain, why there are coefficients 2 in the equation for rate of change [A]?