Molecular Imaging - Any surprises to be had?

Molecular imaging, using STM and AFM technologies, appear so far to visually prove most of what we already know about chemical structures, such as VSEPR theory. For instance, here are the ideal structures and AFM of a couple of cyclization reactions: 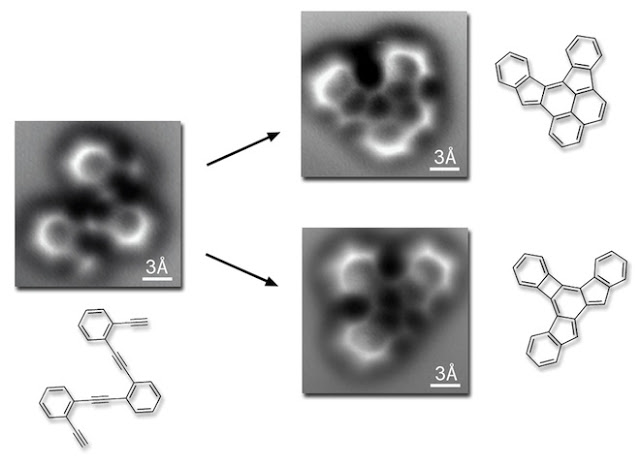 The question is, have there been any surprises to be had from these images, where something we thought was structured one way was in fact radically different? You can see in the AFM image that some of the bond angles deviate from the ideal regular shapes a little, and it may also be that the electrons in the pi bonds, instead of being regularly distributed, seem to prefer the "far" end of the phenyl rings, but the predicted structures are uncannily accurate. Again, with the orbital imaging, the s orbital isn't perfectly spherical and we don't see the full p-orbital shell, just two "lobes", but again, they're powerful evidence that our theories are right so far.

Has this ever not been the case? Have any of these recent images turned chemistry on its head by showing something totally unexpected?

I don't think this is going to put basic quantum chemistry upside down. Because chemistry is complicated, and these tools are "inaccurate". Let me illustrate : it was thanks to spectroscopy of atoms that people discovered the spin of the electron. It then explained a lot of fact that puzzled chemists. A molecule is something awfully complicated, that we can only solve with approximations and powerful computers. So to my mind, molecular observables are unlikely to contradict quantum theories. Now you need the LHC to split particles in order to test the theories.

This guy will tell you that there are surprises to be had about large molecules, the ones from natural sources (or plain coal) that are a pain in the ass to study by NMR, or enzymes (like this one, studied with single molecule diffraction).

There will be always surprises. But if we could predict them, would they still be surprises ? (sorry that was too long for a 'comment')

Not the answer you're looking for? Browse other questions tagged physical-chemistry vsepr-theory or ask your own question.

6
Can we observe the shapes of MOs?