Why is tantalum so unreactive?

What is the fundamental argument behind explaining why Ta metal is so inert and does not usually participate in corrosion? I know that it forms a protective oxide, but nothing explains why in an acidic solution it is resistant to nearly everything (aside from HF). I want to know if it has to do with a bond strength of the metal or the molecular orbitals. An in-depth citation is required.

I think the answer to your question can be described based primarily on thermodynamic considerations. Ta has very high fusion (25 kJ/mol), vaporization (760 kJ/mol) and atomization (780 kJ/mol) enthalpies which are a result of strong metal-metal bonding in the solid (see Greenwood and Earnshaw, Chemistry of the Elements).

To further understand the protective nature of the native oxide that forms on Ta, it is fruitful to look at an Ellingham diagram, which describes the stability of a metal oxide as a function of temperature. For more authoritative sources than the Wikipedia page, see a comprehensive Inorganic Chemistry textbook such as those by Shriver and Atkins or Housecroft and Sharpe. I found this site particularly interesting for purposes of visualizing Ellingham diagrams and used it to make the following plot: 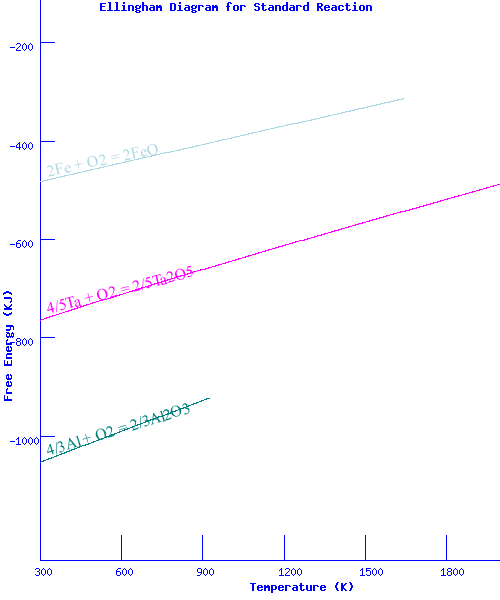 (Apologies for the color scheme, which was not adjustable)

Here I've plotted the free energy for the oxide formation of tantalum oxide along with oxides of iron and aluminum. The x-axis is temperature. The large negative values for each of these oxides indicates that they are all thermodynamically favorable at the temperatures plotted. Room temperature would be very slightly to the left of the intersection of the x and y-axes. A complete analysis of the stability of the metal oxides would also require consideration of kinetics, but we can use thermodynamics to postulate that the very large negative values for the free energy of formation of the tantalum oxide are one factor in the stability of the oxide film. I'll leave it to the OP to play around with thermochemical cycles, which should demonstrate why the oxide films are resistant to many types of acids.

I think, there are no secret properties of tantalum. The primer corrosion resistant is thin layer of Tantalum pentoxide $(\ce{Ta2O5})$. It's more case of a reaction of an oxide with fluorides. Here some related quotes from the book Chemistry of Tantalum and Niobium Fluoride Compounds by Anatoly Agulyansky:

As opposed to the oxides, fluoride compounds are characterized by the formation of mostly ionic bonds. This peculiarity is related to fluorine's high electronegativity.

Oxygen and fluorine ions have very similar ionic radii. This steric similarity ensures relatively easy substitution of the oxygen in the compounds, by fluorine ions. Such substitution opens up huge possibilities for the synthesis of oxyfluoride compounds with desired crystal structure and properties.

Other reactive metals like Tantalum with highly protective oxide layers are Zirconium, Hafnium (though most Zirconium contains Hafnium), Titanium (though it needs oxidising ions or platinum alloying to handle acid solutions), Chromium.

Aluminium and even iron will handle concentrated nitric and sulfuric acids due to protective oxide layers formed. Tantalum is generally the best and most all-around active metal to handle acid and other solutions.

Not the answer you're looking for? Browse other questions tagged inorganic-chemistry transition-metals reactivity or ask your own question.

2
Why Gold and Silver react minimally with atmosphere?
10
Why doesn't copper react with hydrochloric acid while the other metals do?
35
Why is gold unreactive when only one electron is in the outer shell?
22
Why are Group 11 elements unreactive?
4
Why is oxygen an oxidizing agent?
39
Why does potassium react more violently with water than lithium?