Can hot food ever emit x-rays or gamma rays?

I was just wondering, if heating food up is the result of increasing the energy of bends and stretches in the bonds of the molecules, is it ever possible for tiny amounts of x-rays and gamma rays be emitted?

When we give a molecule enough energy, its electrons can jump to higher orbitals and then return to ground state, releasing EMR with a frequency proportional to the energy gap. So if we heat food, is there a chance that some electron received enough energy to jump up to a really high energy level?

In theory, yes, you can heat objects to a high enough temperature to emit x-rays or gamma rays. You cannot do this to food, and you certainly cannot do this in your kitchen (or probably any kitchen).

This is not a lot of energy! However, a single photon is boring. Let's consider a mole of photons. This will also ease comparison with other phenomena, whose energies are listed per mole of events.

In theory, if you could pump that much energy into something, you should get some high energy photons out. In practice, it does not work that way. Other stuff happens first. To simplify our example, let's just consider 1 mole of water (18.0 grams) and heat it up. The fate of basically any other matter will be the same, but the energy required will vary a bit.

Once we get enough energy into our sample of water, the molecules start to fall apart.

By fixing $\Delta G=0$ at equilibrium, we can solve for a temperature at which this reaction becomes spontaneous:

So, we now have pumped nearly 200,000 J into our water sample, atomized it, and heated it to approximately 5000 K. We are now close to the temperature of the outer layers of the sun! Surely we have enough energy at this temperature to produce x-rays. Nope. At 5000 K, we produce minimal x-rays. Most of the radiation is in the visible, UV, and IR (think about what we get from the sun). Below is a plot of black-body radiation as a function of temperature (image by Wikipedia user Darth Kule and released into the public domain): 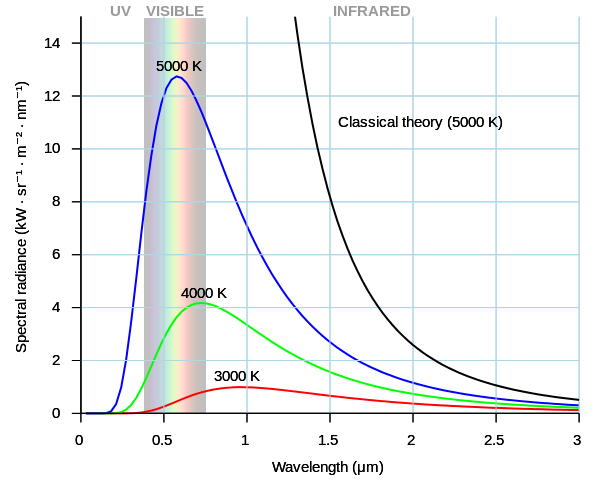 Okay, so we are far beyond the reality of what can happen in a conventional oven (or almost any reasonable heat source used for food). At this temperature, we can use the Planck Law to calculate the power output ($I$) of x-rays at the temperature. We can also do this at some normal temperatures and for gamma rays. This model is a little goofy, since food is not a black body, but we will at least calculate the max x-ray and gamma ray output.

Rather than grinding through all the maths, I'll just put in a table of some temperatures and watts. 1 watt is not a lot of power. Most lightbulbs produce light in the kilowatts.

So, if you could heat your food to the temperature of the sun, it would produce minuscule x-ray radiation. It would also no long resemble food.

It has nothing to do with what you were going for, but there is a small, but non-trivial amount of x- and gamma-ray output for most food and so the answer is trivially "yes".

In particular any food containing potassium will have the usual admixture of K-40 (with it's 1.3 and 1.5 MeV gamma lines).

When I worked in a lab with a low-background, high-sensitivity germanium detector I used to try to bring a banana in my lunch on days we were expecting a visitor so I could demonstrate the detector without having to do any paperwork concerning possible exposure of the visitor to radiation: just put the banana in a clean ziplock bag, put that in the detector, start the DAQ, and watch a nice peak grow on the screen. Broccoli works just as well, of course, but it's broccoli.

But of course none of this has anything to do with heating the food.

Not even close! Your food would likely be vaporized, and leave an awful mark on your kitchen table, before it could contain enough energy to be producing xrays.

When I was a youth, I used to do a lot of 'microwave experiments', as in domestic microwave ovens. I would be known for buying a used microwave from a thrift shop for around $10 and use it to produce 'microwave plasma' with (which was essentially ionizing carbon, analogous to the way neon gas would ionize if you stuck a neon gas filled tube in the microwave and turned it on).

During the course of this, I witnessed a lot of different materials arcing, melting, vaporizing, or ionizing in domestic microwave ovens. At some point, probably after cooking up filamented (incandescent) light bulbs, I started thinking and also wondered about what kind of energies produce xrays. Could I be irradiating myself with with harmful rays or high-energy particles being emitted off of all these arcs? Some of the lightbulbs glowed a crazy green color right before the end of its life, and I remembered reading reading that old-timey xray bulbs produced a distinct green light when producing xrays.

So I looked into it, and it turns out... There is no way that my 1000 watt domestic microwave oven was producing xrays, even if you consider that most lightbulbs are evacuated (under a mild vacuum).

Apparently, if I wanted to start creating x-rays in my own back yard (i didn't), I was going to need at least 2 things:

Now people will love to start in with 'Well technically, it could', point out that we can calculate this, and proceed to work out a value that requires hundreds of decimal places before you see a significant digit, but just because the equations don't hit a limit and break down at some point, does not mean its ability to describe something physically real doesn't.

Other quick interesting facts about microwaves: