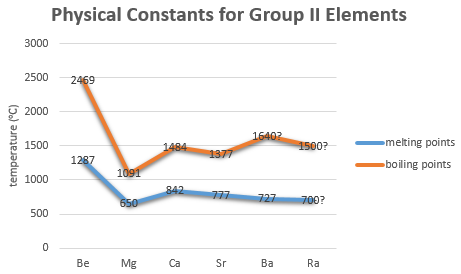 I have added question marks where the variability in data was rather disturbing (over two hundred degrees Celsius), or where the value is simply disputed. Nevertheless, this topic is not about the different results from measurements. Instead, it focuses on the "trend" in general.

For group I, we would say

Here are the atomic radii and ionisation energies of group II elements.

These (apart from radium) do seem to follow the same logic as in group I, however they do not correlate with the melting or boiling points. Some textbooks claim,

A good measure for the strength of a metallic bond is its atomisation energy.

Let us have a look. 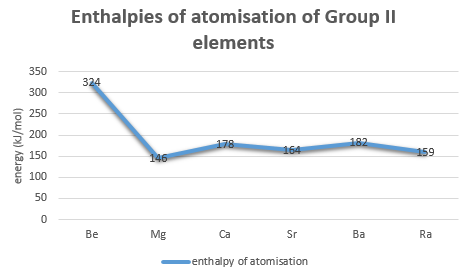 Sure, this does agree better with the boiling and melting points. But note that it is actually not an explanation! Why do the atomisation energies behave in such a way?

This is where most resources either

Beryllium and magnesium have crystal lattices that are hexagonal closest-packed (close-packed?). Therefore, they have their own trend. Then there are calcium and strontium which have face-centered cubic lattices. Finally, the pair barium and radium have body-centered cubic structures.

Others say this is not enough, because the differences should not be as significant, especially for magnesium but also for barium. Barium has a 8-coordinated structure but has a higher boiling point than 12-coordinated strontium!

It might also be stated that melting points themselves are not the best estimator of the strength of bonds. The bonds are not all broken, but rather rearranged and "made weaker" as a result.

As of now, is there an explanation for melting and boiling point trends of group II elements? Is there consensus?

Its goes down because the attraction between electrons in sea of electrons and cations in the metal lattice becomes weaker therefore less energy is required to interrupt the lattice and easier to melt .

Not the answer you're looking for? Browse other questions tagged elements boiling-point melting-point or ask your own question.

12
Why does magnesium have an exceptionally low melting point?
0
Random order of melting points of group 2 elements