I have some very plain candles. I don't think they contain anything but paraffin wax and octadecanoic (stearic) acid, since they are odorless and very hard to bend, tending to crack instead (even at around 45 degrees Celsius). I want to make some moldable wax plugs for bottles without heating over about 50 degrees Celsius (it'll burn my hands, I have no other tools to use). How can I get rid of the acid? I don't particularly care if the acid is destroyed; but it would be nice if it wasn't so I could make soap or something.

Some possible ways I've thought of:

What seems like the best or most effective method of removing the acid?

It should be noted that typically, candles are about 10% stearic acid and 90% paraffin. Also, there are many different grades of paraffin waxes which are generally identified by their melting points (often given as ranges); candles are usually made from paraffin graded from 53.3 °C (128 °F) to 65.6 °C (150°F), while paraffin of 76.6 °C (170 °F) is more common for molding and sculpting.

So I'm pretty sure that you didn't know what grade of paraffin you are after, and I would guess that you are looking for something more like cheese wax. While cheese wax is significanly softer, it actually has a generally higher melting range of perhaps 72 - 82 °C (161 - 179 °F).

Cheese wax is a blend of paraffins:

However, there may be multiple grades of paraffin used for your candles or the grade used may be of a low enough melting point (MP) to be useful for making the product you desire (in conjunction with other materials to make it softer for sculpting or molding).

The "analysis" and the separation procedure would be based on the melting point. So, (I would) try to use the melting points to separate the stearic acid from the lower temperature fractions.

Step 1. Melt the candles in a pot and remove the strings. If possible, you would want to use a hot plate with accurate, good-quality temperature control.

Step 2. Insert a (candy) thermometer and a spoon or ladle in the pot (maybe a screen-type of ladle, like what is used for noodles and dumplings). You need the ladle to be warm, so that the wax doesn't freeze and stick to it when you use it to scoop out the stearic acid. 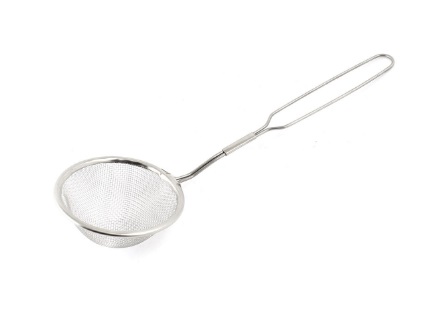 Step 3. Reduce the heat until precipitates begin to form. This should begin to happen somewhere around 70 °C. With an open pot, the cooler surface will probably cause the top to skim over. The higher melting point fractions might be what solidify first on the top, like slag on molten steel. The first precipitates or slag should be higher in octadecanoic (stearic) acid concentration. Use the ladle to scoop/filter out the precipitates (put the stearic acid in a in another pot or a bowl). You should keep collecting precipitates until it reached about 55 °C or until it all becomes solid. Be sure to make note of the final temperature. If the temperature at which it all solidifies is at or above 60 °C, then the kind of paraffin that you have is probably not what you wanted; and it will be quite difficult to separate, and this procedure is not very useful for separating the stearic acid from the paraffin.

Step 4. Even if the paraffin has a low MP, this will not be a 100% perfect procedure (far from it); you will probably need to repeat the (enrichment) procedure a couple, or maybe several, times. Also, you could probably recover some (low MP) paraffin from the precipitated/enriched stearic acid filtride. It might be favorable to have a few bowls or pots which represent collections at different temperature ranges... like, for example, the first bowl would contain solids from 70 - 65 °C; the second bowl contains solids from 64 - 58 °C; and the third bowl contains solids from 57 - 52 °C.

Step 5. Measure the new MPs. A good anylysis of the cleanliness of this procedure will be to compare the MPs. A pure solution of stearic acid will melt/solidify at exactly 69.3 °C, but obtaining a pure solution in this manner, is a pretty lofty dream. So, after the stearic acid fraction has melted, let it cool and mark the temperature at which it begins to solidify and the point at which it is completely solid. If the two fractions that have been separated have distinctly different melting points, that's pretty good. Specifically regarding the paraffin, if it doesn't begin to solidify until it's below 50 °C then, great job, it's pretty clean and you obtained the low temperature paraffin that you desired!

Step 7. Further chemical reactions for cleaning up the stearic acid (or converting it to soap) could be performed with better results from the enriched fractions.

Not the answer you're looking for? Browse other questions tagged organic-chemistry acid-base home-experiment purification or ask your own question.

1
Removal of water from sulfuric acid
7
Removal of tetrabutylammonium from an organic reaction
5
Is the recipe for my shaving cream complete nonsense?