Why do you need a strong base for a titration

For a titration, if you want to know the concentration of an acid you use a strong base such as $\ce{NaOH}$. My question is; why you can't use a weak base for this purpose? Is it because the calculation would be tougher? Is it because you'd need more of the base?

There is no reason why you cannot use a weak base to titrate a strong acid. The calculation is probably considered a bit more complex but I think the real reason is a practical one. For the sake of simplicity, I swapped your question around just a bit, and the figure below shows the titration of a strong base (blue) weak base (reddish) and very weak base (dashed line) with a strong acid (say, for example 1 M $\ce{HCl}$). 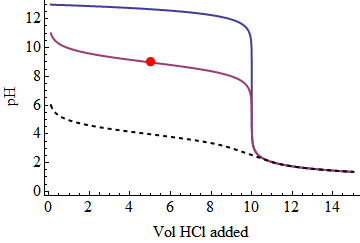 So the bottom line is this: the calculations aren't harder (one uses the Henderson–Hasselbalch equation and this is a standard exercise in a first year analytical chemistry class) but the data one obtains from the experiment are harder to analyze. And in practice, we do perform weak/strong acid/base titrations when we are interested in determining the strength of the acid or base under consideration.

Because a strong base should be able to titrate nearly any acid, strong or weak. Recall that strong/weak does not mean concentrated/dilute! It means that, for an acid, it is easy/hard for the acid to donate a proton to the base's hydroxide ion. If you use a weak base to titrate a weak acid, you may not be able to accomplish anything if the base is too weak, because the weak acid doesn't want to donate the proton, and the weak base doesn't want to accept it. Even if you use a strong base, it may be the case that your acid is so weak that even your strong base is not strong enough, but this is rare. This is where you use the so called $\ce{pK_a}$ values of the acid and base to determine if you can get a reaction, which is the titration.

If you use strong base for titration the titration curve will be very steep. It makes it easier to observe the equilibrium point.

Not the answer you're looking for? Browse other questions tagged physical-chemistry acid-base analytical-chemistry or ask your own question.