Why are spherical compounds with a half filled HOMO concidered aromatic?

In planar annulenes, huckel's rule effectively states that compounds with a full HOMO for their conjugated $\pi$ systems are considered aromatic while those with a half filled outer shell are antiaromatic. Aromatic compounds are stabilized both by delocalization across their $\pi$ complex and possessing a full HOMO spread across the ring. On the other hand, antiaromatic compounds break degeneracy among their orbitals, preventing resonance, as it would only result in a half filled outer shell. Despite this, according to this source, a half filled HOMO in a spherical compound will result in aromaticity on a sphere. Is this because there is so much potential for delocalization in spherical compounds, since they contain so many conjugated pi bonds, or can this be explained with something else?

OK, let's get this straight. There is no such thing as spherical aromaticity. The so-called Hirsch's rule is sheer nonsense and never works.

Now don't get me wrong, the premises were sound. When we have dozens of atoms arranged kind of uniformly on the surface of a sphere, the whole thing starts to look mighty like continuous - reminiscent of a huge "atom" consisting of surface only, without any depth. Naturally, the eigenfunctions (AKA molecular orbitals) of such a system would be the pure angular functions without the radial part, and their energy will be determined by the angular quantum number $\ell$. The bottommost orbital would be like $s$ (a sphere of one sign), then would go three $p$-like orbitals (each with one change of sign), then five $d$-like orbitals, and so on. Look at the lowest energy levels of $C_{60}$ (pictured), or any other fullerene, for that matter; they would go just like that - one, three, five... (With any other fullerene, the correspondence would be approximate; with $C_{60}$, because of its high symmetry, it is exact). And of course, when we count the electrons up to the $n$'th level, we get $2n^2$. 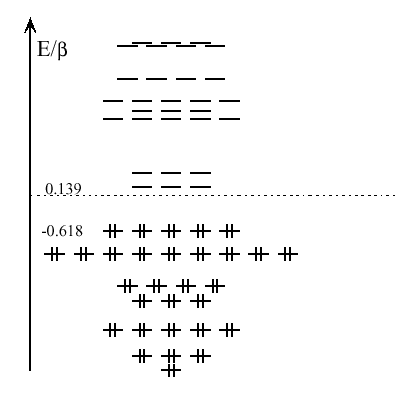 Sounds good, does it?

Well, it just does not work. There are too many crude approximations on top of each other. Most importantly, when we get all the way up to the HOMO, our eigenfunctions start changing sign too often, so we can't any longer pretend that the surface of a fullerene is continuous. Consequently, the pattern breaks and all conclusions fall apart.

One might point out that pretty much any rule in chemistry is like that, including the Hückel's rule itself. It is also built of crude approximations, isn't it?

That's right, it is, but there is a huge difference, too. Hückel's rule works. Hirsch's rule doesn't. The former predicts the outstanding stability of benzene, and not-so-great stability of cyclooctatetraene, and that cyclopentadienyl would prefer to be an anion, and so on - and they all obey. The latter predicts... well, see for yourself.

What are the magic numbers of electrons for the presumed spherical aromaticity? $2,\,8,\,18,\,32,\,50,\,72,\,98$ and so on. The first five are too small for a fullerene, so ignore them. 60 is not magic, so one would expect it to be unstable. WRONG. It is pretty stable. The paper you mentioned says it is strained. Now what was that about? Of course it is strained, as are all fullerenes and nanotubes; if you don't strain that $sp^2$ carbon, it would just form a flat sheet known as graphene. But what in the world does this have to do with [anti]aromaticity? Think again of the old good Hückel's aromaticity. Think of the cyclopropenyl cation; is it aromatic? Positively yes (pun intended). And yet it is like ten times more strained than fullerene. Aromaticity and strain are totally unrelated things; if people bring up one of them to judge the other, they are either clueless or deliberately misleading, even if they managed to get a paper published in a peer-reviewed journal.

Antiaromaticity, if anything, is about having a half-filled HOMO and thus being prone to Jahn-Teller distortion, radical reactions, and other unpleasant things. Is this the case with $C_{60}$? Look again at those energy levels. Look at the completely filled HOMO, and the completely empty LUMO, and that huge gap between them. Look and think twice before calling this guy antiaromatic.

Now comes the "magic" number 72. That would be $C_{72}$. Does it exist? Well, yeah, it kinda does, like any $C_n$ where $n$ is even and $\ge70$. Is it particularly stable? No, it does not seem so; it is way less abundant than the smaller $C_{70}$ and the bigger $C_{76}$, which themselves are way less abundant than $C_{60}$. Also, starting at $C_{76}$, the fullerenes would have multiple isomers, and as soon as $C_{80}$, we find an example where one isomer is unstable for electroniс reasons (antiaromatic indeed, if you'd like) and the other is stable. So the stability is not determined by the number of electrons alone, after all.

Now what would you call a seemingly reasonable rule which works $\bf{0\%}$ of the time?

Not the answer you're looking for? Browse other questions tagged quantum-chemistry aromatic-compounds or ask your own question.

46
Is buckminsterfullerene aromatic?
14
Does aromaticity require a co-planar pi system?