Deducing orbital degeneracy in geometries apart from octahedral or tetrahedral

How do you determine the crystal field splitting pattern when given the structure of a complex?

It's quite simple for structures like octahedral or tetrahedral, but I find that the reasoning behind the patterns for the trigonal bipyramidal structure, for example, is somewhat arbitrary.

Do I just have to accept that this is how it works (as in, is this just a "limitation" of the crystal field theory)? Or is there some aspect that I am missing/misunderstanding?

The easiest way to do it is to look at what other people before you have done.

I don't think there is a way of looking at diagrams of the orbitals and concluding that they are necessarily degenerate. As you said, there isn't "enough information to assume that the two parts add up to one".

It isn't really a limitation of crystal field theory, either. Crystal field theory isn't about looking at how much orbitals overlap with each other and saying "oh, I think those look about the same, they're probably degenerate". If that was the case then in an octahedral complex you would not be able to tell why $\mathrm{d}_{z^2}$ and $\mathrm{d}_{x^2-y^2}$ are degenerate, since the former only really overlaps with two ligands and the latter overlaps with four.

The degeneracy is predicted by symmetry, the application of which is integral to, and implicit in, crystal field theory. There is no CFT without symmetry considerations.

I think you might just be confusing the orientations of the five d orbitals. I don't think you're misunderstanding any aspect of crystal field theory. You're just missing that dxy overlaps with a ligand. I drew a picture. 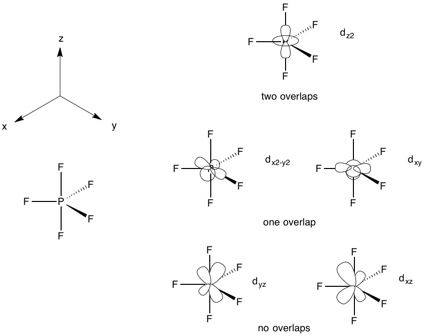 Not the answer you're looking for? Browse other questions tagged inorganic-chemistry coordination-compounds crystal-field-theory or ask your own question.

7
Complexes formed by lanthanides and actinides
2
Which d-orbital configurations form an octahedral complex?
3
Crystal field splitting pattern with strong field and weak field ligands
3
How can I determine the structure of complexes with ethylenediamine as a ligand?
4
Second order Jahn-Teller effect for d0 complexes
5
Distinguishing between octahedral and tetrahedral holes