Do carbodiimides exhibit axial chirality or do the nitrogens invert rapidly enough, as in trisubstituted amines with different alkyl groups?

Yes, carbodiimides exhibit axial chirality similar to allenes. While there are significant differences in the allene - carbodiimide systems (see below) there are also some similarities. For example, just like in amines and imines the barrier to racemization in generally carbodiimidesis low, typically in the 6-10 kcal/m range. 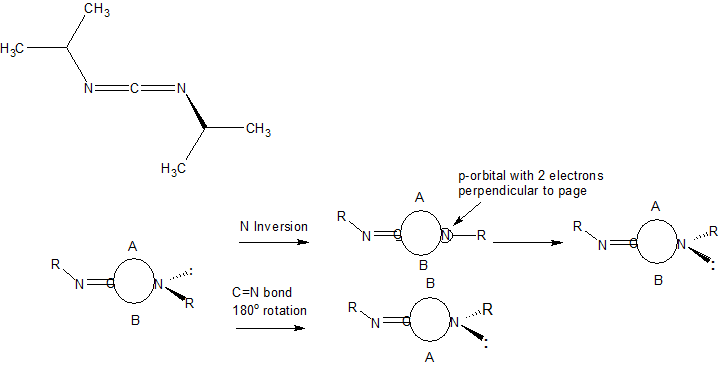 In the chiral compound each isopropyl group would contain two diastereotopic methyl groups split by the isopropyl proton so we would expect to see 2 doublets. On the other hand, if racemization is rapid all methyl groups become equivalent and we would then expect to see only one doublet. Experimentally it turns out that around -150 C the doublet broadens into 2 doublets giving rise to a barrier height for racemization around 6.7 kcal/m.

2) Carbodiimides are not linear, but rather the $\ce{N-C-N}$ angle is around 170°. This is attributed to the terminal nitrogens being more electronegative than the central carbon and consequently affecting the hybridization of the central carbon (e.g. changing it from $\ce{sp^1}$ to $\ce{sp^{x}}$ where 1 < x < 2)

3) Racemization in carbodiimides can be achieved by two different mechanisms

both mechanisms are thought to play a role in carbodiimide racemization.

8
Why are oxime geometrical isomers stable?

3
Finding chiral carbons in aromatic or cyclic compounds
3
Is chirality a physical or a chemical property?
10
Axial or planar chirality in spiro[3.3]hepta-1,5-diene
4
How to find the number of stereoisomers of a tetra-substituted allenes, exhibiting both axial and central chirality?
6
M/P nomenclature for axial-chirality
0
Are bi-cycles chiral molecules?
1
Can sp2 hybridised carbon show chirality?
3
Is the existence of chirality center equivalent to chiral?
1
Is chirality absolute or relative?