Why can toluene be chlorinated at either the benzylic position or the ring depending on the conditions?

My book mentions a reaction for the preparation of benzaldehyde with toluene in which side chain chlorination of toluene gives (dichloromethyl)benzene, which upon hydrolysis gives benzaldehyde:

The halogenation of toluene is possible by two mechanisms. In German, they are referred to by the shorthands KKK and SSS, where KKK stands for Katalysator, Kälte, Kern (catalyst, cold and core) while SSS is Sonne, Siedehitze, Seitenkette (sun, sizzling heat and side chain).

At low temperatures and in the presence of an activating catalyst such as $\ce{FeCl3}$, halogenation of toluene will typically occur as phenyl ring halogenation following the electrophilic aromatic substitution mechanism.

Scheme 1: Catalytic chlorination of toluene with $\ce{Fe^3+}$ as a catalyst. ortho- and para-products expected; (para not shown) mesomeric structures of the intermediate not shown. 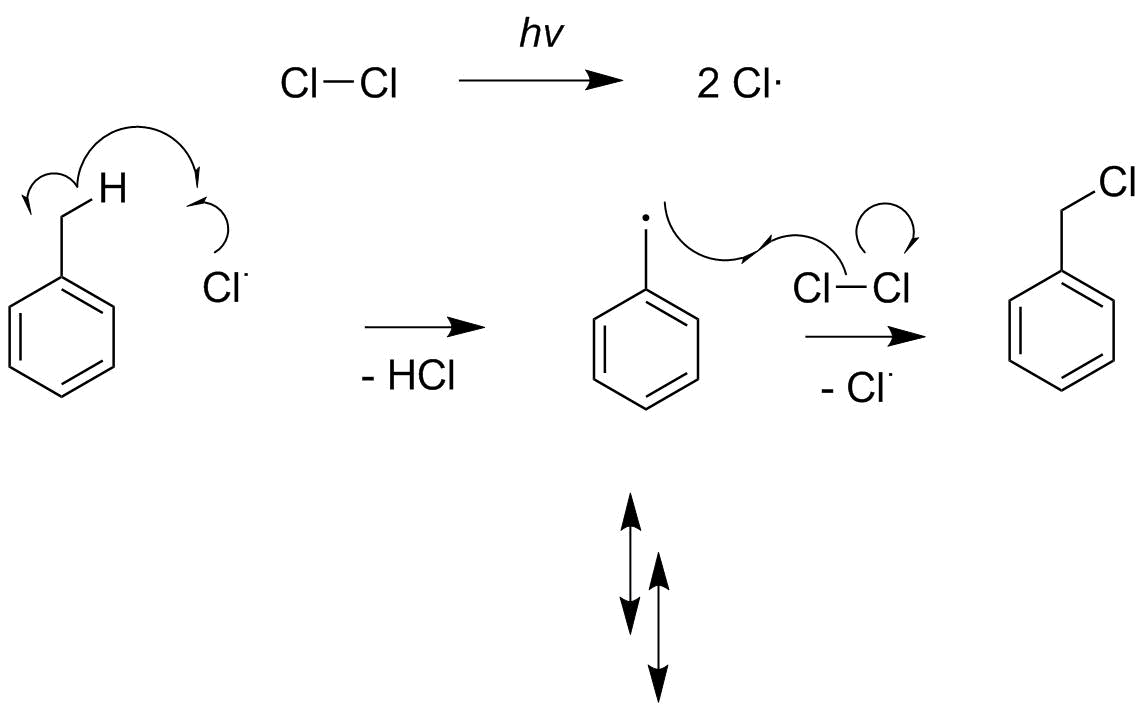 The electrophilic aromatic substitution is, of course, not as easily possible on the benzylic carbon; we would somehow need a free electron pair to appear there — not likely.

On the other hand, if a chlorine radical attempted to remove a hydrogen of the phenyl ring, that would result in a radical that cannot be delocalised (the $\ce{C-H}$ bond is orthogonal to the π-system) which is therefore very unstable. Another way of looking at it is to consider the $\ce{C–H}$ bond strengths: weaker bonds are more easily cleaved homolytically, as is the case in free-radical halogenation. Aryl $\ce{C–H}$ bonds are roughly $\pu{100 kJ/mol}$ stronger than benzylic $\ce{C–H}$ bonds (Wikipedia), so radical abstraction preferentially occurs at the benzylic position.

Taking into consideration that the radical concentrations are typically much lower than that of $\ce{Cl2}$, these recombination steps are much less likely than the reaction of the benzyl radical with a chlorine molecule.

Benzyl chloride, the primary reaction product of the photochlorination may again serve as a hydrogen atom donor in a further reaction with chlorine radicals:

Not the answer you're looking for? Browse other questions tagged organic-chemistry aromatic-compounds radicals regioselectivity or ask your own question.