My textbook, Chemistry: The Central Science, gives this figure to explain the purple color of the hexaaquatitanium(III) ion:

Such absorption spectra are common to chemistry and biochemistry. However, as the crystal field theory explains, the peak wavelength absorbed is equal to the splitting energy $\Delta$ between the two split energy levels of the d subshell. This is illustrated in the figure below. 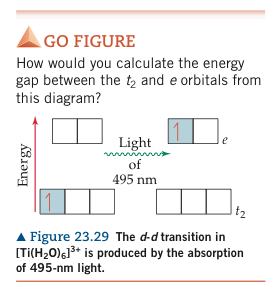 So the splitting of the d subshell explains the peak of the absorption spectrum. However, I’m not comprehending why the curve slowly descends on either side of that peak—if only 495 nm light is absorbed, then shouldn’t the absorption spectrum show absorption only at 495 nm, with no absorption anywhere else? Why does absorption slowly decrease as you move in either direction away from 495 nm? What mechanism allows these other wavelengths to be absorbed as well?

Moreover, normally, when things absorb light, they reemit the energy in the form of infrared. That’s why that wavelength is taken out of the wavelengths that reflect back to your eyes; if the same wavelength were reemitted, you would perceive it too. I assume infrared is radiated because electrons can take alternate pathways to move back to ground state, jumping down in small steps that release less energy each time. However, with d subshell splitting, there is only one possible way for the electron to climb down to ground state. Shouldn’t that mean that the wavelength it absorbed will be reradiated out? Shouldn’t we see that wavelength, then?

You would expect a sharp peak for a well-defined structure which has bond lengths and angles that do not significantly change. In a crystal structure at low temperatures you may be able to observe sharp peaks rather than broad bands.

In solution, however, there is a number of effects that broaden the peaks, making the entire thing less sharp:

Different solvents will give different peak broadening (I saw a graph once, but I can’t remember where it was).

The titanium(III) spectrum is also more complex, by the way. If you look closely, you can see a shoulder on the low-energy side of the main peak. This is because the excited state is Jahn-Teller distorted, and there is not one but two transitions possible that slightly differ in energy. (The ground state is very, very weakly Jahn-Teller distorted, because there is not much energy to be gained.)

After a molecule has absorbed the energy of a photon and went into an excited state, there is not only the simple rerelaxation that would emit a photon of the same wavelength to return to the ground state. Rather, by a set of complicated mechanisms, the energy can be transformed into vibration (more and more vivid than before) and thus slowly released in form of heat. That is why a solution that absorbs light will warm slightly.

Not the answer you're looking for? Browse other questions tagged quantum-chemistry electronic-configuration color photochemistry crystal-field-theory or ask your own question.

13
Why is absorbance spectrum continuous and not quantized?
24
Why does the energy gap for π - π* transitions shrink with the size of the pi-conjugated system?
4
Is it possible to make broad spectrum light absorbing paint?
5
Why do complex ions not emit light from de-excitations of electrons?
3
Color imparted to flame and color of coordination compounds
5
Why objects usually don't exibit fluorescence/phosphorescence?
14
Are there any (simple) molecules with very different absorption and emission dipole directions?
0
When an electron returns to it's ground state does it release the same wavelength of light that promoted it in the first place?
7
When pigments absorb light only around a single particular wavelength, why aren't they still white?