Why does the unstabilised Wittig reaction selectively form cis alkenes?

This question is meant for a simple unstabilised ylide.

The mechanism of the Wittig reaction, as given on ChemTube3d, involves a concerted formation of the oxaphosphetane (this is generally favoured over the traditional stepwise mechanism with betaine formation):

In the excellent book by Clayden, Warren, and Greeves, there is a section beginning p. 690 that describes the oxaphosphetane formation as a concerted, antarafacial [2+2]-cycloaddition reaction (similar to your "puckered transition state").

Here, the phosphonium ylide and the carbonyl compound approach each other at right angles. The substituents are arranged in order to minimise steric repulsions in the transition state. In particular, the phenyl group (Ph) points away from the PPh3 group, and then the R group on the ylide points away from the Ph.

(By the way, the book also has some justification why the Wittig reaction of stabilized ylides is E-selective.)

Since the OP asked for it I will try to give some justification on why the ylide and the carbonyl group approach one another perpendicularly. For a proper description one would need the frontier orbitals of both compounds and then reason about the orbital interactions that bring about the [2+2] cycloaddition. Since I don't have those I will try to give some oversimplified description that should convey the general principle at work here. In the approximate orbital pictures I'm going to use I'll leave out the substituents for clarity.

To begin with, if one imagines the orbital interactions between the ylide and the carbonyl group, it is clear that the most important (primary) interaction for the reaction is the one between the HOMO of the ylide (nucleophile) and the LUMO of the carbonyl group (electrophile). What happens when both groups approach one another head-on or at right angles is shown in the following picture (for the perpendicular approach a top-view is used). 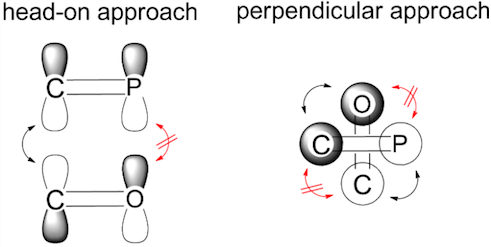 However, some compounds have additional orbitals that: (1) are similar in energy to the frontier orbitals drawn in the picture, and (2) possess the right symmetry to interact with the other orbitals. These "secondary orbital interactions" are weaker than the HOMO-LUMO interaction, but might provide enough bonding to tip the balance from an overall non-bonding to a bonding situation.

The question is now, is there a suitable secondary interaction? One can argue that P has a lot of orbitals (valence shell extension) and that the LUMO of the ylide might be some empty phosphorus orbital (or at least an orbital with a big coefficient on $\ce{P}$) - this could be a p-orbital perpendicular to the ylide's C=P π-orbitals, or a d-orbital, or something like that. This phosphorus orbital can then interact with the carbonyl group's HOMO, which has its biggest coefficient on O. So this bonding interaction will be biased towards P–O bonding. The situation is shown in the following picture: 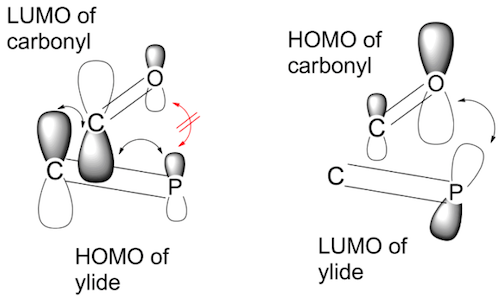 The biases in the primary and secondary orbital interactions will lead to some distortions from the pure perpendicular approach which will become more pronounced the nearer the two species get to each other. For example, the ylide might rotate a bit so that its C and P atoms are closer to the carbonyl's C and O atoms respectively, in order to maximize the bonding overlap. And of course the perpendicular approach of ylide and carbonyl group will proceed in such a way that their respective biggest substituents are as far away from each other as possible (see diagram above).

After this quite lengthy answer I want to make clear that this description of mine is only a guess. The real reaction path is still a matter of debate and there are some compounds that rather react via a radical or ionic pathway. But I think it gives a good explanation for most of the observed behaviour and hope it helped the understanding. A more exact frontier orbital description of another thermal [2+2] cycloaddition, namely that of ketene with ethene, can be found in the textbook by Brueckner on p 653.

2
Which of the these SN1 solvolysis of two alkenyl bromides reactions is faster?
11
Oxymercuration and demercuration mechanism
10
Why is the less substituted alkene favoured in Hofmann elimination?
4
Why do Zr, Sn, and Ti enolates form syn aldols selectively?
24
Which is the currently accepted mechanism of a Wittig reaction?
7
Why do stabilised ylids lead to trans alkenes in the Wittig reaction?
9
On the mechanism of the nitrogen-removal step of the Wharton olefin synthesis
7
Differentiating between Prins reaction / ene reaction experimentally
1
What is the necessity of re-hybridisation of carbon in the transition state of SN2 reaction?