How should I think about potential energy surfaces for reactions of complex systems?

One thing I would like to better understand, though, is how to think of the potential energy surface (PES) of these sorts of systems. The way I see it, a PES is just a potential energy profile (PEP) with one or more dimensions beyond energy and reaction coordinate. I understand that you cannot really compute a complete PES for a complex system. Most of the PES's I've seen are for simple systems like this solvent study of an SN2 reaction: 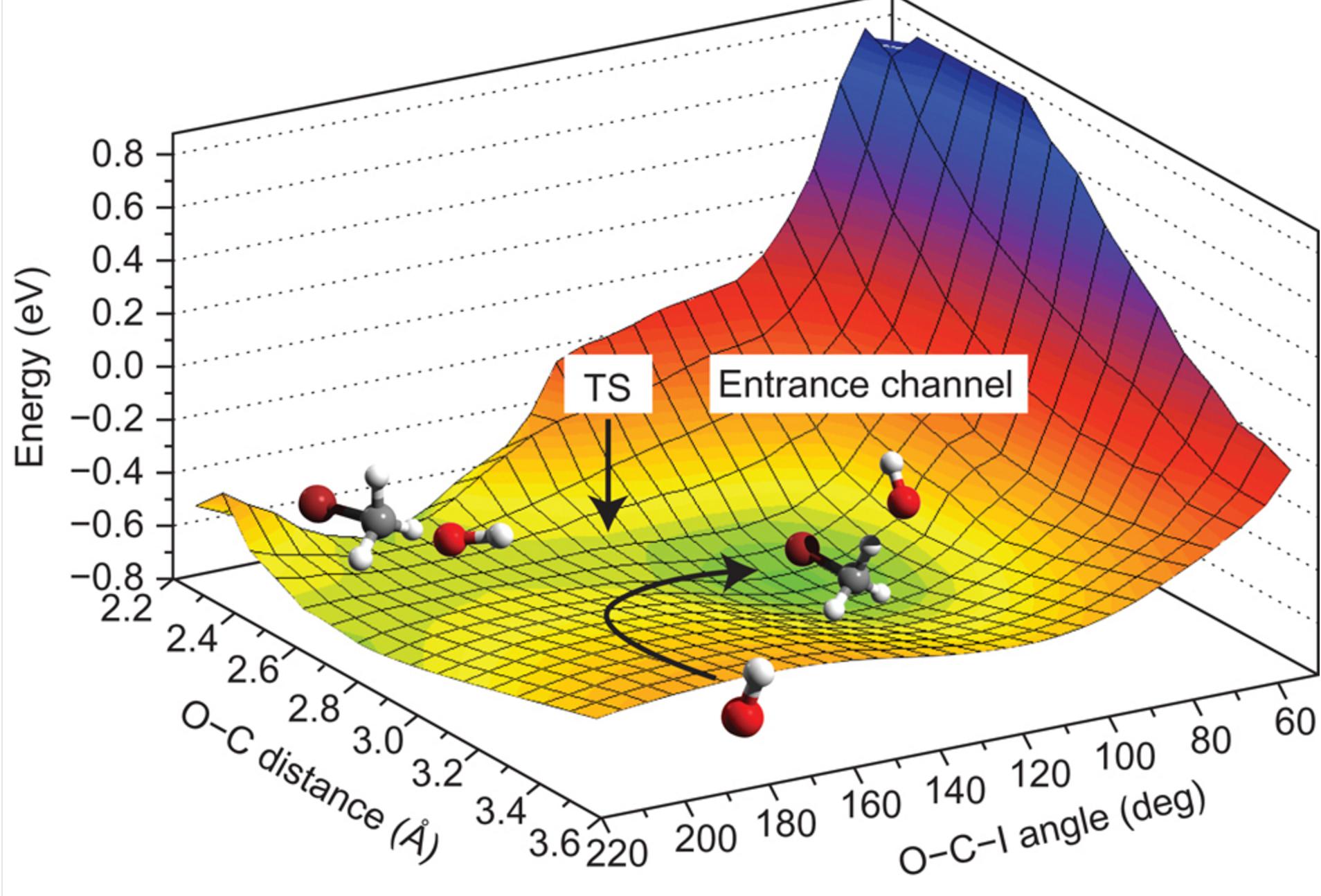 This is simple enough to understand. They have added the dihedral angle as another dimension of their picture of the reaction dynamics. But what about a large system, especially a non-rigid one? Since there are so many more possible ways the system can move, does that mean its 'true' PES is polydimensional? I like to think of these mechanistic studies of big reactions as us 'exploring the PES', even though we cannot see the whole thing. How should I think about this surface? Am I understanding this concept properly?

physical-chemistry computational-chemistry
Share
Improve this question
asked May 28 '16 at 11:12

In order to understand what the PES really is, it is useful to see where this concept comes from.

Since a multi-dimensional function is impossible to visualize, usually we study the PES by considering few interesting degrees of freedom (as the O-C distance and O-C-I angle in your example). Therefore, as you say, you can think as if you are exploring the PES locally and in a reduced space.

I never looked to this into details but I think computational programs climb the PES uphill from the initial and final state of your system (i.e. they follows -$\vec{F}_I$) in order to find the TS.

In this context, the PES is not proper of a reaction but the nuclei involved.

For a "large" number of nuclei, the dimension of the PES will be very large. Ideally, 3$N$-6 with the considerations above.

How it looks like? It is hard to imagine and represent in an 2D screen. By the way, I never found it useful, no more than to imagine that the reaction is a ball rolling down a hill.

To turn it into something that can be useful, the PES is projected into a subspace spanned by the vectors linked to the coordinates of interest for the case (for example, two bond distances).

Does it answer your question?

It could be done, but with "the PES is not proper of a reaction but the nuclei involved" I meant that the whole PES is independent of the trajectory followed by the nuclei during the reaction.

- Can you show me an example of a projection of a PES? (Or do you just mean the PEP, as it is shown in most computational journals?)

I mean the projections of the PES usually plotted. With PES is projected into a subspace spanned by the vectors linked to the coordinates of interest for the case I meant the following. The whole functional cannot be plotted in high dimensional cases. So, the trick is chose a set of variables that allow the description of the nuclei positions BUT also allow just use a few to describe the important part (which depends on your needs).

A simple example would be the PES corresponding to the model of a benzene molecule (built for teaching purposes) in a laboratory when you are interested in teaching parabolic movement. Of course you can describe it with Cartesian coordinates of each nuclei in R^3 (12*3=36 coordinates). But they are not very useful, you need to make appear the $x^2$ somehow for your young students. So you make a change of basis and get a new set of coordinates. Three translational of the geometrical centre and internal coordinates. Then, you can make a matrix representation of this vector: [int1, int2, ..., int33, z, x, y]$^T$. It is horrible to write here (you'll see why soon) so fortunately found a little ball. And you reduce it to [z, x, y]$^T$ But your student have to plot the famous parabolic case in a paper, and you only need $x$ and $y$, so you can just discard $z$ or make a projection by applying the matrix representation of an operator $P= P^2$.

My advise is: Just look at the PES as a simple function $R^N \rightarrow R$ with $N$ at least as 3$n$-6. There is nothing special about it that makes it different from what you studied in your algebra/calculus classes. The only one particularity is what the variables represents (nuclear positions), it was well described by the @R.M. answer.

I really never find it too useful more than a fast inspection of simple energy curve. I found the mathematical machinery of the optimisation algorithms much more useful. But of course, I looks very nice in papers, I would recommend a good colour scheme.

Not the answer you're looking for? Browse other questions tagged physical-chemistry computational-chemistry or ask your own question.

8
How should I modify my molecular dynamics simulation so that known chemical reactions can be modelled?
1
Explicit differential equation based model of protein folding
4
Suggestions for simulating transport through membranes with Molecular Dynamics (MD) and Monte Carlo (MC)?
11
Educational practice problems/systems/reactions in computational chemistry
2
Estimate Partition Function from a simulation
6
How can I reach the two minima connected by a first-order saddle point (transition state) using the Gaussian Software
4
What is the "curse of dimensionality" in molecular dynamics?
12
Finding chair and boat transition states during ring-forming reactions