The slaker is operated on a semibatch fashion where water and lime are fed until the desired amounts have been added and when the reaction has finished a new batch can be started. Water is added in excess with a mass ratio of approximately 1:4. The addition of the reactants takes about six minutes and after that some minutes are required for the temperature to rise due to the reaction. The reactor is not emptied between the batches but the contents exit to a secondary tank through internal piping on an overflow basis. An example of the development of the reactor temperature is given below. 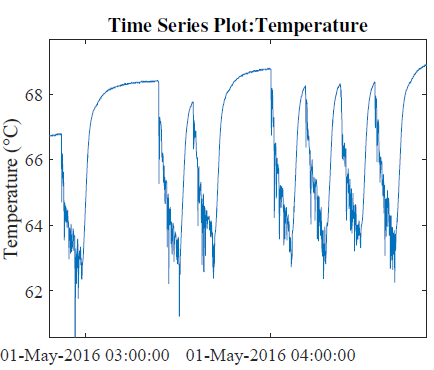 Because of the overflow the volume of the reactor (and the contents) stays constant. The output feed is not measured. In general, the material balance of a model is:

For the lime addition weighing data is available to determine the mass of the added quicklime. The lime feed screw is operated at a constant speed so the feed rate can be determined. The water feed has a flow measurement.

What would be the best way to form the material balances as the reaction happens between a liquid and a solid? How to determine how much material is displaced by the addition of lime? How does the formation of calcium hydroxide affect the balance?

Browse other questions tagged applied-chemistry or ask your own question.

12
Can we process waste just by decomposing it to homogenous mass and extracting the elements from it?
4
Are there any STP liquids not containing large amounts of hydrogen and oxygen that are safe for human contact?
3
Lubricants and rubber