Why does Devarda's alloy include copper?

Devarda's alloy is used in the detection of nitrates. However, judging by the reaction equation, only aluminium plays the role of reducer:

Why does it contain copper? Is copper also capable of acting as a reducer here?

I know that zinc, the third component, is capable of that.

Virtually every analytical chemistry textbook's chapter on anion determination mentions that Devarda's alloy is very brittle and can be easily pulverized in a mortar, unlike $\ce{Al}$ and $\ce{Zn}$ metals. This is quite handy property as for qualitative analysis of nitrates in a heterogeneous media the reducing phase should be ground to fine powder in order to:

On top of that, German Wikipedia also supports both comments by Ivan Neretin

and suggests that copper facilitates catalytical formation of a local electrochemical cell. A reduction with Devarda's alloy can be carried out in weakly alkaline solution or even in neutral solution, whereas reduction with aluminum often requires a strongly alkaline solution. At the same pH, the reaction with Devarda's alloy is overall significantly faster than when using zinc or aluminum.

This was experimentally demonstrated by Mertens et al. [1]: 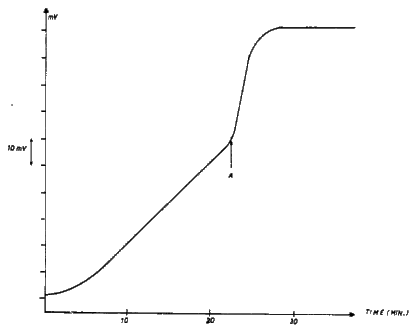 Figure 3. Potential observed with the ammonia probe during the reduction of 20 ppm $\ce{NO3-}$ as a function of time
From $t = 0$ to A: aluminum dust. At point A, Devarda alloy was added.

More recent science (as compared to 1975), the action of Al with NaOH is believed to produce surface absorbed hydrogen atoms on the aluminum. Related chemistry is commonly employed via the vigorous action of HCl on Zn (so one of the roles of zinc is to provide added surface area, which may be acted upon by NaOH also, to answer a posited question).

More precisely on the referenced surface chemistry, let me quote from this 2008 doctoral thesis " Alkaline dissolution of aluminum: surface chemistry and subsurface interfacial phenomena" by Saikat Adhikari, as an example:

Hydrogen embrittlement, a process in which brittlement and subsequent cracking of metals is caused by ingress of atomic hydrogen into the metal, is also sometimes thought of as a type of stress corrosion cracking. Due to the detrimental effects of such corrosion processes, it is important to have a fundamental understanding of associated alkaline or acidic dissolution mechanisms.

Apart from activation of the surface, dissolution of aluminum in alkaline solutions at open-circuit also leads extremely high rates of H-absorption into the metal, [9-14] and also formation of nanoscale voids or hydrogen bubbles [15, 16] near the aluminum surface.

H-absorption on the Aluminum surface is a source of hydrogen radicals, •H, which could engage in a stepwise breakdown of nitrate to ammonia. For example, with the nitrate ion a radical reaction:

As: e- + H+ ⇌ •H, the net of the above two reactions can be written as (source, see Section 8.28.2.1 Summary of Properties) the following cited reaction for the first stage creation of nitrite:

My experience with just alkaline Al is that it is apparently difficult to stop the reaction at the point of just nitrite creation only, by say limiting the amount of aluminum.

So we have a complex reaction system involving surface chemistry, and in the presence of other metals (like copper), a galvanic cell (which implies two different metals, namely Zn and Cu, to answer a second question) introducing solvated electrons, which may push the equilibrium below to the right: $$ e-(aq) + H3O+(aq) ⇌ •H (aq) $$ promoting hydrogen radicals. The latter could explain the acceleration in the breakdown of nitrate (as reported).

Interestingly, one may assume that the •H radical functional behaves (per its seemingly reversible formation reaction: e- + H+ = •H ) as apparently a (e-, H+) pair acting on ions. For an example from 'Hydrometallurgy 2008: Proceedings of the Sixth International Symposium', p. 818, a commercial reductive leaching application citing the reaction (based on surface-treated Aluminum) to quote:

Source reference for the above.

which I view functionally as follows:

Further, I do NOT recommend experimenting with Al/NaOH in the presence of impurities in a chemistry class. To quote from Bretherick, Volume 1, page 23-24:

A student mixed aluminum foil and drain cleaner in a soft drink bottle, which started emitting gas. Another student carried the bottle outside and was claimed to have been overcome by the toxic fumes [1]. Most drain cleaners are alkalis, so that aluminum will dissolve to produce hydrogen. The bleach that it is is suggested may have been present will produce no toxic fumes in alkali, and one would be surprised to find arsenic or antimony compounds present. If the collapse was not purely hysterical, the remaining, though remote, possibility would be phosphine. The soft drink the bottle had contained was one of the many perhaps best described as impure dilute phosphoric acid [2]. "

Not the answer you're looking for? Browse other questions tagged inorganic-chemistry redox aqueous-solution analytical-chemistry alloy or ask your own question.

0
Why do we need to add Al in excess for the reaction between a nitrate and a base to give ammonia?

3
Why is AlMg3 called aluminum alloy?
2
can an alloy be used to make another alloy?
8
What is difference between aluminium mercury alloy and gallium aluminium alloy?
4
Why does Brady's reagent include sulfuric acid and methanol?
2
Identify what alloy of metal tool
2
Boric Acid and Brass Alloy