The standard reduction potentials for the following half reactions can be found here.

You can see from this that only iodide is a strong enough reducing agent to reduce $\ce{Fe^3+}$ to $\ce{Fe^2+}$ at standard conditions. Even with non-standard concentrations it will be very difficult to get bromide to do the reduction because the difference in electrode potential is large.

The trend in electrode potentials for the halogens can be explained in terms of the increasing electronegativity going from iodine to chlorine which increases the first electron affinity. It just so happens that the crossover point with the iron reduction is between iodine and bromine.

As it is pointed out in other answers and in literature, it is indeed thermodynamically unstable and its reaction synthesis has unfavorable pathways. But, is it "non-existent"? Not quite. There was a possibility of its existence indicated by the fact that hydrated ferric oxide dissolves in hydriodic acid, yielding a brown solution. Its thermodynamic limitation was known in aqueous medium, so its synthesis was thought to be carried in non-aqueous medium. It was the year 1989 that the synthesis was somehow achieved. Diiodotetracarbonyl(II) iron was photochemically reacted with iodine in n-hexane medium to yield the product:

However, there were some limitation to this reaction:

Iron(III) iodide as a binary salt is highly unstable/transitory, but stable complexes are known with appropriate ligands.

Pohl et al. [1] first synthesized such a complex, $\ce{FeI3(SC(N(CH3)2)2)}$, actually oxidizing iron(II) iodide with elemental iodine in the presence of a carefully controlled amount of $\ce{((CH3)2N)2CS}$. The iron(III) iodide, despite the high oxidation state of iron, acts as a soft acid, coordinating to sulfur instead of nitrogen (picture from Ref. [1]):

Barnes et al. [2] report that reaction of iron metal with trimethylarsine diiodide affords the complex $\ce{FeI3(As(CH3)3)2}$, a trigonal bipyramidal complex with a structure similar to that of lighter halide complexes (picture from Ref. [2]). 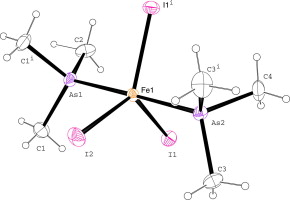 These reactions, together with the oxidation of the iron(II) iodide-carbonyl complex reported in Nilay Ghosh's answer, share some common characteristics:

These features suggest that $\ce{FeI3}$, as such, is not all that unstable; rather it is the combination of $\ce{Fe^{3+}}$ and $\ce{I^-}$ ions that doesn't hold up. If the iron(III) iodide were to be formed in a process that avoids the use or generation of the separate ions, it would more likely be sustained.

Compare these results with cerium(IV) chloride.

Actually, some have voiced an opinion that FeI3 can apparently be created with difficulty, and is reputedly very unstable, decomposing into FeI2 and I2. Similarly, with CuI2, which is likewise unstable. To quote a source reference. $$ FeCl3 + 3KI = FeI3 + 3KCl ; FeI3 = FeI2 + I2 $$

Iodide ion is a good reducing agent and hence reduces metal in higher oxidation state into lower Ones.

Even, more interesting is the fact that FeI3 is extremely photosensitive! See this ebook, which describes FeI3 as "very difficult-to-prepare" and as "intensely black" in appearance, which is somewhat definite for a compound arguably that some claim does NOT exist.

So, in light, I would expect:

which means, in light, an even shorter half-life with potential transient atomic iodine presence and creation of elemental iodine.

So per reference above, one may be able to prepare (albeit briefly) some FeI3 (aq) by adding FeCl3 to a source of iodide (like aqueous KI). Here also is an interesting (but still speculative) supporting source, to quote from the abstract:

This study first reports that ferric chloride (FeCl3) can lead to the formation of iodinated coagulation byproducts (I-CBPs) from iodide-containing resorcinol solution or natural waters. The unwanted I-CBP formation involved the oxidation of iodide by ferric ions to generate various reactive iodine species, which further oxidize organic compounds. Although the oxidation rate of iodide by FeCl3 was several orders of magnitude slower than that by chlorine or chloramine, most of the converted iodide under the ferric/iodide system was transformed into iodine and iodinated organic compounds rather than iodate. Formation of four aliphatic I-CBPs was observed, and four aromatic I-CBPs were identified by gas chromatography mass-spectrometry and theoretical calculation. Coagulation of iodide-containing waters with FeCl3 also produced I-CBPs ranging from 12.5 ± 0.8 to 32.5 ± 0.2 μg/L as I. These findings call for careful consideration of the formation of I-CBPs from coagulation of iodide-containing waters with ferric salts.

The liberation of iodine together with the formation of iodinated coagulation byproducts (supportive of possible atomic iodine formation with any light exposure from the highly photo-sensitive FeI3) possibly suggests a photo-assisted breakdown of FeI3 (aq), in my speculation.

Not the answer you're looking for? Browse other questions tagged inorganic-chemistry redox oxidation-state or ask your own question.

1
How can I make cerium(IV) chloride?

5
The Acidity of the Hydrated Iron (III) Ion
2
How can chlorine have an oxidation number of 3 in chlorite?
6
Oxidation states of iron in Roussin's salts
2
If Oxygen has a lower electron affinity than Sulfur, then why doesn't sulfur has a lower electron affinity than selenium?
0
Oxidation State Of Propene
1
Calculating n factor of SO2
3
Corrosion of iron: no electron pushing mechanism?