I'm attempting to write a small program that will calculate the values for the Ideal Gas Law, specifically for molecular Hydrogen (H2) in space. Eventually, this will grow to be a sort of "simulator", but right now I seem to be having problems with remembering my college chemistry and physics.

Here is a picture of the form that I created: 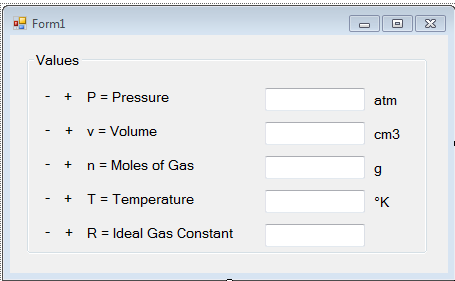 So in my program (written in C#), I have the following as initial values for those variables:

My problem is that, how does one go about trying to solve for P or v? Do you assign an arbitrary number for what you suppose the volume of the gas would be in space, and then calculate P based on that? Or is it the other way around?

Extra, yet entirely unneeded info: This was brought about because my 7 year old daughter asked me how stars were made. I gave her the explanation that anyone who's got even a remote interest in it gives to their kids, but thought it would be pretty cool to make a little program that would give her a visual. Here was my explanation:

"we think that Hydrogen stuck together to make even larger clouds of Hydrogen, which increased the total mass of the gas cloud, increasing the gravitational pull on other atoms/molecules of nearby gas, etc. This eventually got to the point that the gases started to heat up as they were squished together by their own mass, but that increase in temperature created an outward push (pressure), which got into a tug-of-war with gravity acting on the mass of the gas itself. And later, we got a star. That's how most of us non-scientists think it happens, anyway!"

More seriously, you need to check your units! You seem to be using Kelvins for $T$, which is right, and $n$ is just a count in moles. But I do not recognize your value of $R$. The SI value for $R$ is $8.3144621(75)$, in units of joules per Kelvin-mole. Joules, in turn, are Pascal-meters$^3$. Personally, I think most people find Pascals too small a unit for pressure. Far more practical would be Torr-liters, and then $R=62.36367(11)$. You can examine lots of different unit combinations for $R$ at the ideal gas constant page on Wiki: Ideal Gas Constant

On a related note, the ideal gas law can't be applied to stars because IGL assumes the particles are infinitely spread such that gravity between particles is negligible - which is obviously not true for a star!

Not the answer you're looking for? Browse other questions tagged physical-chemistry hydrogen gas-laws or ask your own question.

18
Can an aqueous solution conduct electricity forever?
15
PV=nRT approximation on other planets?
1
Non-Ideal Gas Behavior
46
What volume does one mole of an ideal gas occupy?
5
Explanation for a basic decomposition of water experiment
2
Effect of impurities on melting and boiling points
5
The relationship of the osmotic pressure of a polymeric solution and its the molecular mass