Why did my iron nails not dissolve in hydrochloric acid?

I was trying to dissolve iron metal in HCl to make iron chloride, but ran into some problems. I'll give a brief background of my experiment. I took iron nails and put them in a container filled with muriatic acid (chemicals for my pool). The acid contains an equivalent of concentrated HCl since it is composed of HCl by 37.5%. The other 62.5% is listed simply as "other ingredients".

The faint yellow acid began to turn a more solid green yellow. Gas immediately began to bubble on the nails' surface. I left it for two days to dissolve and when I checked back the iron nails were not dissolved. They look shiny like the rust was cleaned off. The solution is black/dark green and there is a white/green precipitate at the bottom. The nails have small green crystals growing on them

I did this experiment once previously (with the same type of nail and HCl) with just a single nail inside of a hollow plastic pen tube and it seemed to have worked very well; it formed a dark brown solution at the bottom and the rest of the nail looked very rusted to a point where I could not remove it because the rust had stuck it to the inside of the pen.

Is there any explanation for the two different results and the iron nails not dissolving in my other trial? Also is there any guess as to what my solution and precipitate contains? Let me know if any more information is needed. 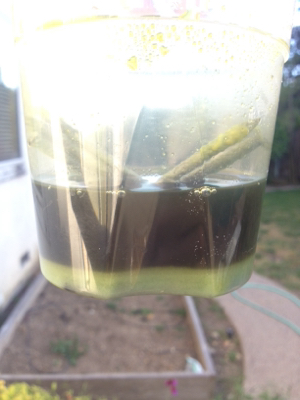 It seems like there is not enough acid on the nails.

Let us know how you do: we learn more from our mistakes than from successes.

Check this by seeing if your solution is still acidic, if you still have it.

Not the answer you're looking for? Browse other questions tagged aqueous-solution home-experiment ionic-compounds identification precipitation or ask your own question.

5
Different reactions of clean and rusty iron nails in vinegar (acetic acid)
6
Can I synthesize iron acetate like this?
4
Problems with precipitation of transition metal solution
5
How to get back my beautiful crystals made from iron and sulphuric acid
1
Black Sludge Appearing When Making Iron Oxide Through Electrolysis
0
How to determine the product from my attempt of HOCl synthesis
3
Why does green ferrous sulfate solution change color to yellow upon addition of hydrochloric acid?