How to determine number of proton environments in these compounds?

Is my drawing correct? Thanks in advance!

In a word, no, your drawings are not correct. And incorrect enough for me to have a rant about NMR teaching at the introductory level.

Some background knowledge before tackling your molecules.

'Environments' is a vague term, often misused and misunderstood, unless you specify what type of environment: chemical or magnetic. As an argument about chemical environments alone, you need only look at the symmetry of the molecule to make a judgement. This can be understood and determined by someone who has never heard of NMR. It might also be an appropriate assessment if you do not intend to make any interpretation of the splittings of peaks from coupling. If you want to look at it from an NMR perspective (and you ARE asking as an NMR question), then you have to consider magnetic environments also. In all four molecules you have drawn, every single proton is in a separate environment.

Equivalence of the proton environments can be assessed on whether a particular nucleus is identical to another site, based on a substitution test. If you substitute, in turn, one of the 1H nuclei in the molecule below, you end up with identical molecules, therefore the protons are chemically equivalent. They will have the same chemical shift.

An additional element of equivalence needs to be considered also, and this relates to magnetic equivalence. Nuclei that are chemically equivalent may not couple to other nuclei in an identical manner, and these nuclei are therefore magnetically non-equivalent. Although they hgave the same chemical shift, their coupling patterns are very complicated, and usually involve coupling to each other. 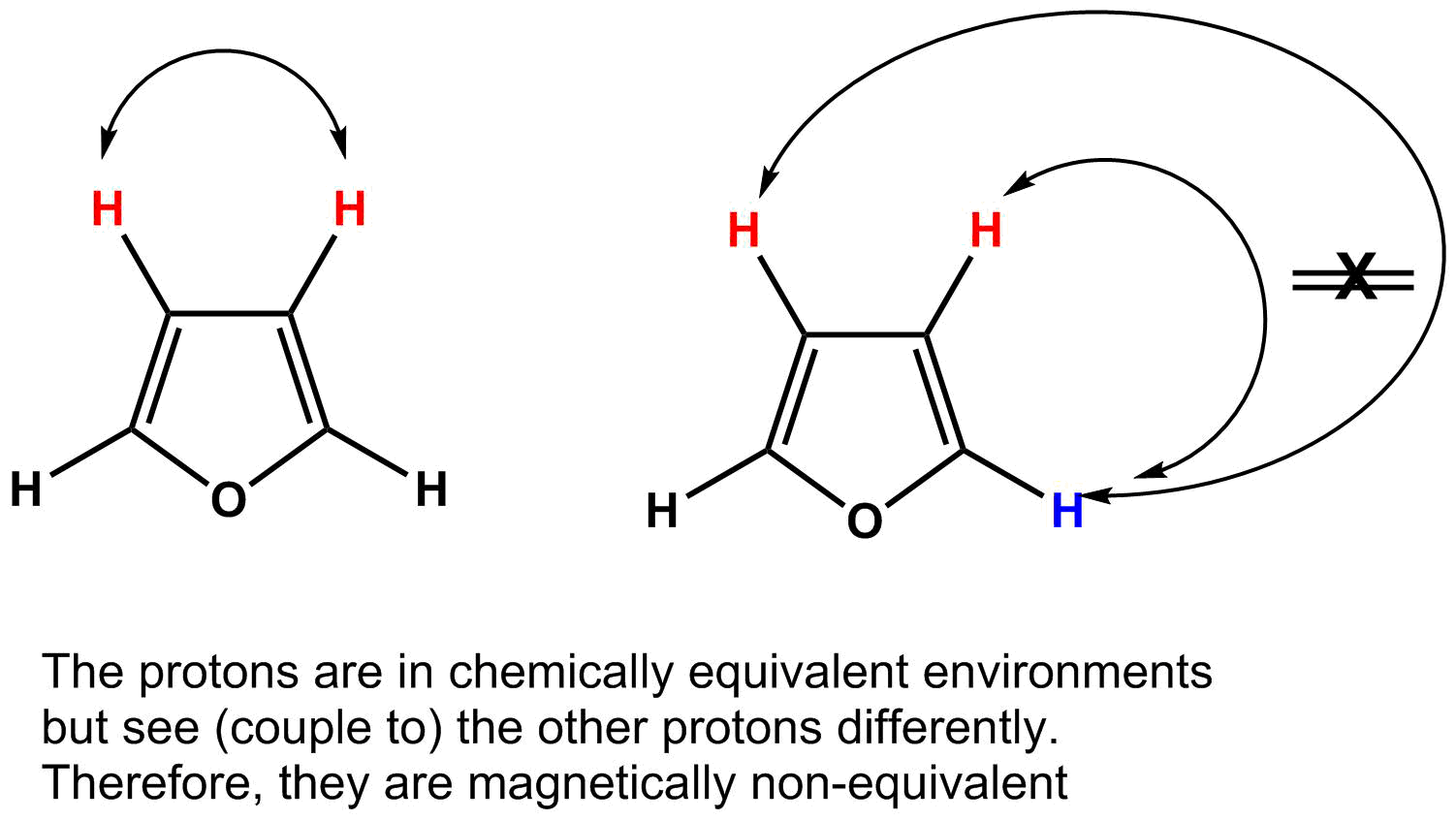 In the case above, the two protons shown in red are in different environments; the same chemical environment, but different magnetic environments. Without understanding this key concept, you would not be able to rationalise the appearance of the spectrum, which actually looks like:

Some standard couplings that you should commit to memory for aromatic rings:

Splittings in a spectrum can be reported as either

Although both methods are used in the literature, the strong preference is for the latter, as it provides structural information, and a means for justifying the appearance of the spectrum. It is much more difficult to start from the appearance of a spectrum and work backwards to determine/justify structure. A triplet coupling implies coupling to 2 identical nuclei

You can work through predicting what you would expect based on known typical couplings. Do this for each proton. A couple of workings are shown, and the theoretical expectation of these peaks is shown. 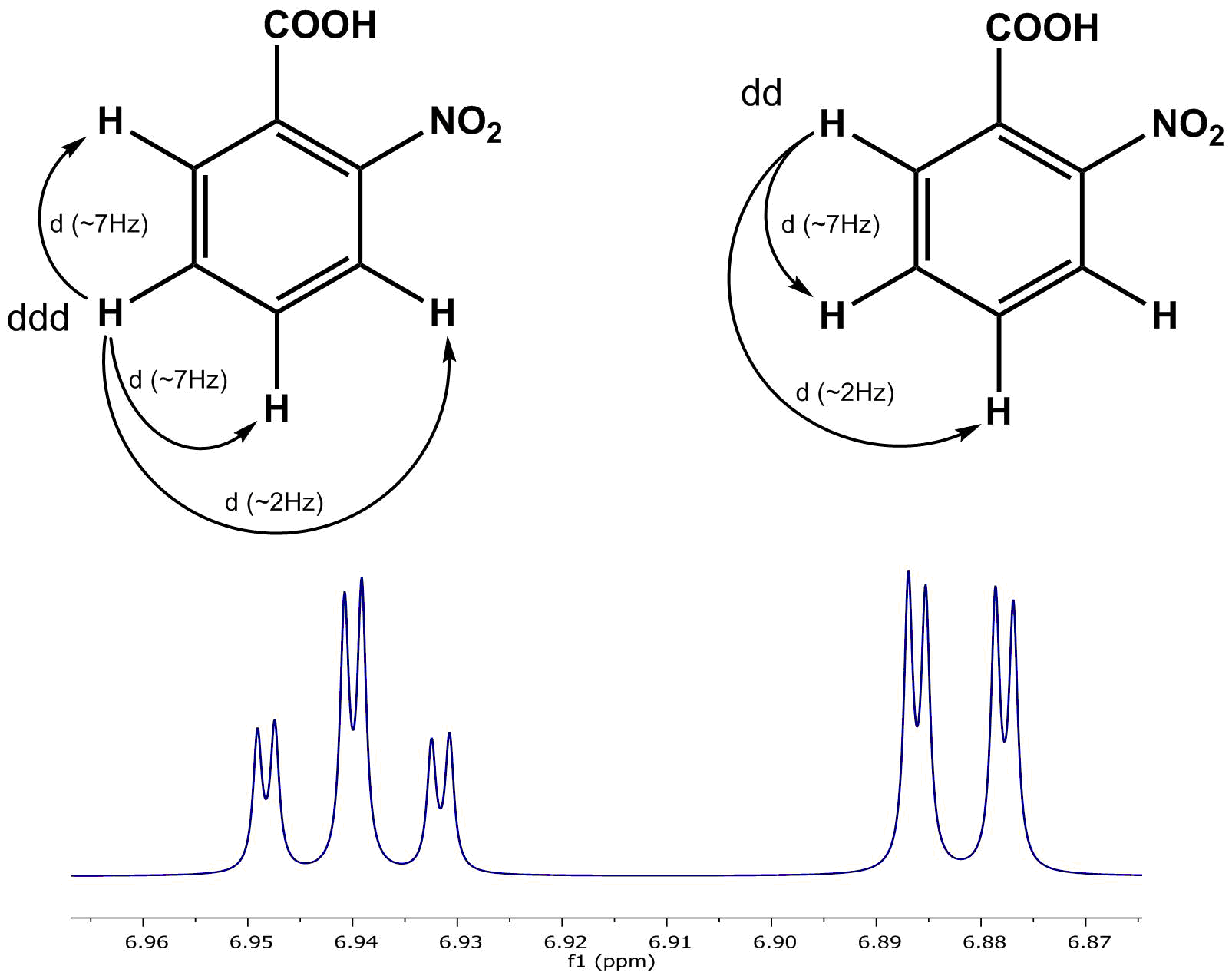 Now, unfortunately, this particular group of substituents are both strongly electron withdrawing, and what you would probably get is compounded complications though strong coupling as the chemical shift differences are not sufficient enough to allow simple first order analysis ie a dog's breakfast, as shown below. 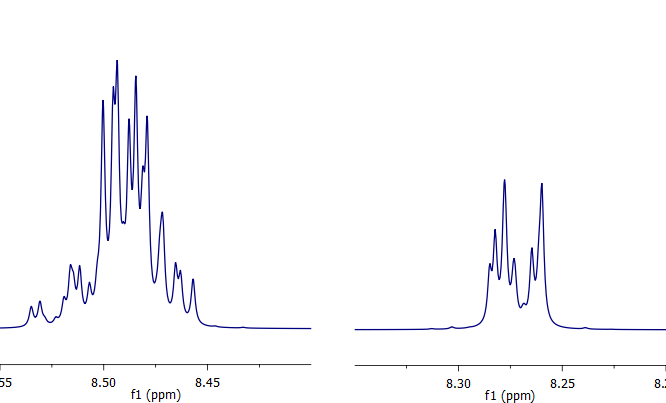 Having spent time determining the number of chemical and magnetic environments is pointless because the spectrum looks so complicated that it looks nothing like you would expect, although this is hardly presumed knowledge for NMR101.

A more suitable choice of substituents, -NH2 and -COOH or -CH3 and -COOH, would have provided a much better example.

There are two chemical environments directly on the ring, but they are magnetically non-equivalent. So again, time spent trying to predict what the splitting might look like leads to frustration because we get a second order AA'BB' system that, although some might try to convince themselves looks like a doublet, is in fact a much more complicated spectrum (like in the case for furan above). Both give textbook splitting patterns that indicate a 1,4-disubstituted or symmetrical 1,2-disubstituted rings, but nothing like what you might expect if you trying to determine expected splittings for the first time.

And so the correct answer for how many proton 'environments' in these compounds is: 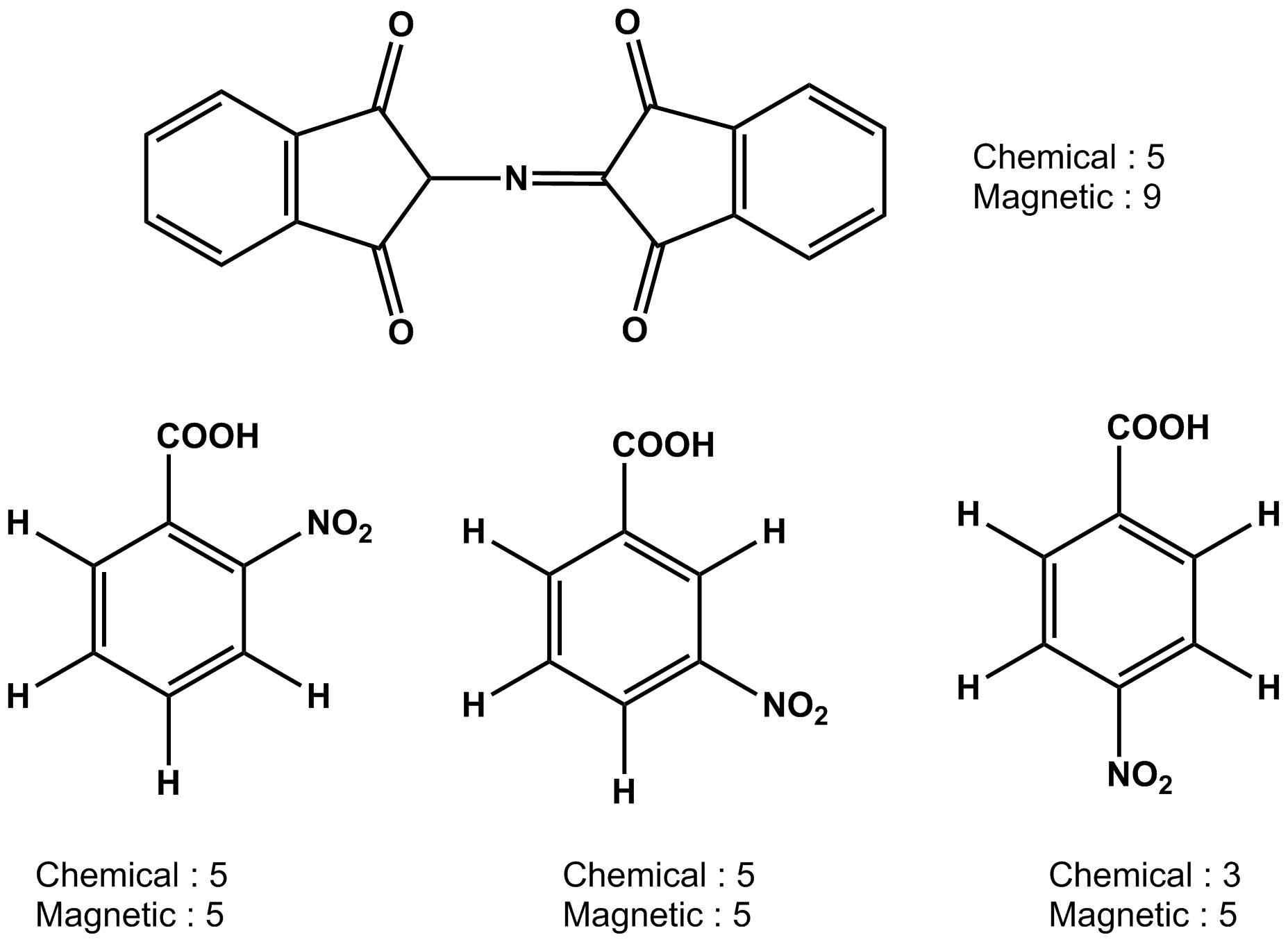 You'll see no triplets, because there are no two chemically equivalent protons in ortho and meta.

I guess you might be right in the case of the para-isomer, because the 5J coupling through the ring might be too weak to see (it is not zero, 3/5 are not magnetically equivalent, neither are 2/6).

In the meta isomer you will see some 4J coupling between position 2 and 4/6, and 5 will definitely show a dd signal.

("dd" means doublet of doublets, i.e. when a proton has two different neighbours. dd can look like a triplet, when the two coupling constants are (nearly) identical.)

0
Unexplained peak cluster in proton NMR trace?
2
para-dichlorobenzene - number of proton NMR signals
1
Determining Molecule Based on Proton NMR (HNMR)
3
Deducing compounds from spectroscopic data for isomers of formula C4H8O
2
Does diamagnetic anisotropy only apply to a proton bonded to triple bonded carbon?
2
How does NMR spectrometer determine area under each peak?
1
Predicted number of signals in proton NMR spectroscopy
5
Am I using these spectra to identify the compound correctly?