Hybridization of sulfur in sulfur dioxide

One of the canonical structures for sulfur dioxide - $\ce{SO2}$ - has sulfur (with a lone electron pair) double bonded to each oxygen atom to form a total of 4 bonds for sulfur - which can be achieved via valence expansion into empty d-orbitals.

What then is the hybridization of the valence-expanded sulfur? It is described as sp². But how can that be? This seems unlikely because d-orbitals are involved since the sulfur underwent valence expansion.

On might imagine a pair of electrons from the 3s/3p oribital(s) being promoted to an empty d-orbital and then having the 3s and 3p orbitals hybridize in to sp². If this is true it would mean that the lone electron pair of the valence-expanded sulfur consists of 2 electrons occupying and unhybridized d-orbital. But is this correct?

The structure of sulfur dioxide ($\ce{SO2}$) is quite complicated.

The image from socratic.org* explains it quite well, please find the $\ce{SO2}$ hybridization diagram via the Internet Archive.

As seen, all the atoms have $\ce{sp^2}$ hybridization.

I'll only focus on the central sulfur atom.

Now, we have dealt with 4 electrons, and only have 2 electrons to deal with.

The 2 remaining electrons actually live in the unhybridized $\ce{p}$ orbital.

At this point, the two oxygen atoms will also have 2 electrons left to pair with the sulfur atom.

Thus, no electron lives in the $\ce{d}$ orbital. 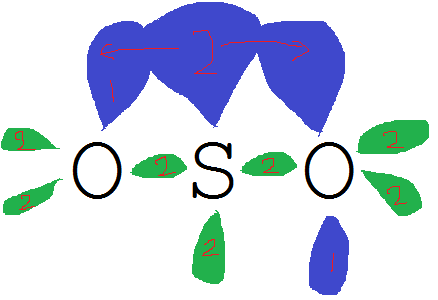 Note that the two $\ce{sp^2}$ orbitals between sulfur and the two oxygen atoms are in $\ce{\sigma}$-bond.

* The website is no longer available; there is no version in the Internet Archive.

2
Why are the two bonds in sulphur dioxide identical?
3
Lewis Structure of SO2
1
What is the correct structure for sulfur dioxide?
2
Bonding in Sulphur dioxide
-2
Why don't atoms with expanded
0
How does SO2 have 2 π bonds?
3
Reason for shorter bond between sulphur and oxygen?