Are there any generic rules / heuristics to identify a good GC vs a bad one?

The context is that during manufacturing-troubleshooting I often get shown GCs of various fine chemicals and I often wonder whether a problem is truly process-related or merely just an artifact of a bad GC operator / column / instrument etc.

Are there any benchmarks or signs to look for that will give a hint that a particular GC wasn't very reliable etc?

For example I've added one such GC graph below. Are there things too look for? e.g. I suppose non flat baselines or clamped off peaks are obviously bad? Merging peaks too? What else? 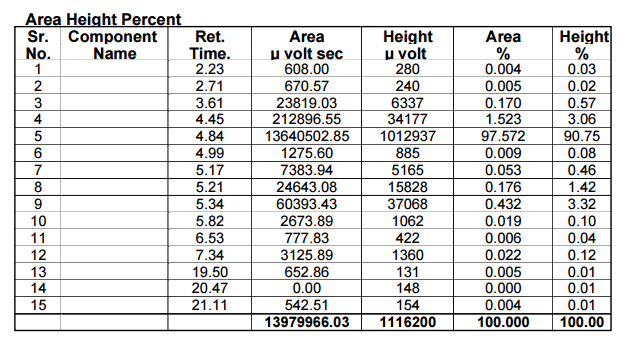 For any instrument that quantifies via integration of a peak (GC, NMR, etc.), sample concentration (peak height) is important especially with low signal/noise ratios. Obviously if the peak isn't in the sweet spot - so to speak - (where its area is significantly above the baseline, but not too big that it saturates the detector) the quantification may be unreliable. Also peak shape is a consideration in integration. If the peak is too broad, much of the area under it can be obscured by the baseline. On GC/MS or GC/FID in particular I used to have problems with peaks 'tailing', that is a broad lingering asymmetry after the peak max which would often overlap with species with greater retention times. No es bueno for quantification. Baking out the column, finding a better heating profile/method usually did the trick.

Optimal methods are going to vary widely based the instrument you use, the solvent, what components you have in your mixture, there relative amounts and concentration etc.. A lot of trial and error. As a general rule though typically when I had 2 components that were close in rt, but wouldn't resolve, I'd move to a method with a much slower ramp for the column temp, upping the carrier gas if possible on your equipment might help, too.

9
Silica turning transparent during column chromatography with chloroform
1
Why is the uncertainty of a digital instrument always the smallest scale division?
1
In Ion Chromatography instrument, Does the specific conductivity (peak area) of an analyte depends upon background conductivity?
1
In HPLC, how does column diameter affect the retention time?
3
Applying vacuum at the end of a flash chromatography column