Interpretation of an H NMR 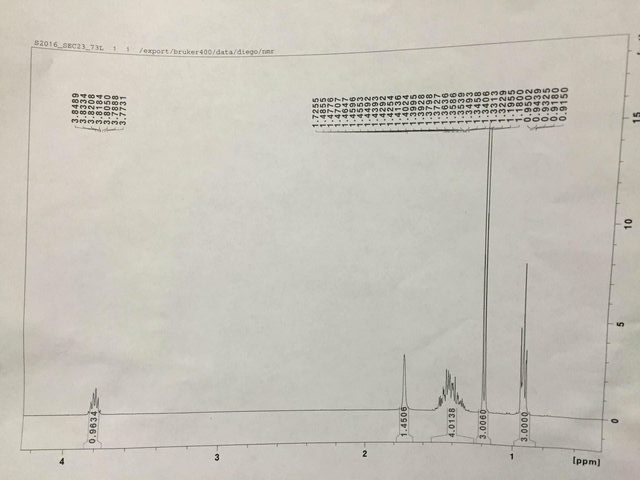 I am fairly new to NMR and require assistance to analyze and interpret the NMR I have provided (sorry for it being vertical). This is an unknown compound that I have derived during one of my lab classes and it would help me a lot to know and understand what compound this is.

This is what I have interpreted so far:

The compound should have between 12 - 13 hydrogens, probably 13 if there is an alcohol involved and no saturated bonding.

the multiple peaks at slightly below 4 ppm can be a ring but also can be a $\ce{CH2}$ near an oxygen and also bonded to a $\ce{CH3}$ group.

However, my interpretations don't seem to add up and I am still figuring out the double peak.

You have now given yourself some information to go on with, and indeed have identified most of the important fragments. Now, the tricky bit is putting them all together! Let's work through what you've got.

Let's first assume that the sample is pure, and the integrals are correct to within reasonable error. This then gives you 5 obvious environments with ratio 3:3:4:1:1. Environments with 4 equivalent protons are not that common, so we might suspect there is some overlap here, and that we have more than one group. So, I count 12 protons.

The peak at 0.9 integrates to 3 - it is most likely a methyl group, and is closely resembling a triplet, so we can make the guess that it is next to a CH2. (It is in fact not a true triplet, and is immediately recognisable as a terminal methyl for a longer alkyl chain - see this link for more information). But for now let's call it a triplet.

The multiplet mess around 1.4 must contain at least one -CH2 (to couple to the methyl at 0.9), which will leave us with another -CH2, or perhaps two -CH groups.

That broad peak at 1.72 is characteristic of an alcohol peak. It is also indicative of a sample which, if not run almost neat, is very concentrated and in a dry solvent. Its integral is not quite correct, but probably because of some excess water in the sample. But it is broad, and in the correct region for an alcohol. You could confirm this by doing a D2O shake, and seeing this peak disappear.

And, at 3.8 you have a -CH which is coupled to more than one thing. You have reasonably proposed that it is adjacent to a -CH3 and -CH2- Its chemical shift suggests that it is near some electronegative group or deshielding group. Knowing you have an alcohol might help narrow the possibilities here. The chemical shift is not indicative of a ring on its own. An alkyl ring would still be to higher field.

So, let's summarise what you know:

I think there is perhaps only one way to connect these fragments.... The key to these types of questions is that once you propose a structure, you can then go back and rationalise what you see to test the structure. Sometimes, you might have to come up with several structures before you get the correct one. But it usually best to start with the simplest, most probable and start eliminating from that.

If you still have problems with understanding any of this, ask some more, and we can go from there.

Not the answer you're looking for? Browse other questions tagged organic-chemistry homework nmr-spectroscopy or ask your own question.