Regioselectivity in Kharasch addition of bromotrichloromethane

When hex-1-ene is treated with bromotrichloromethane in the presence of a peroxide initiator (e.g. dibenzoyl peroxide), what is the regioselectivity of the addition?

This looks like a typical Kharasch (chain) reaction. The reaction is initiated by the formation of peroxide radicals (by homolytic cleavage of the weak O–O bond). These peroxide radicals then go on to abstract Br• from the starting material:

Note that the alternative generation of Br• is unfeasible, as radicals tend to attack at less hindered sites: hence the phenyl radical attacks the bromine which only has one attached atom, and not the carbon which has four flanking halogens. The weaker C–Br bond is also preferentially broken over the other three C–Cl bonds, so there is no chance of generating a CCl2Br• radical.

The trichloromethyl radical then adds to C-1 of the alkene, resulting in the more stable secondary radical. This can now abstract a bromine atom from unreacted bromotrichloromethane to give the product and a new Cl3C• radical. 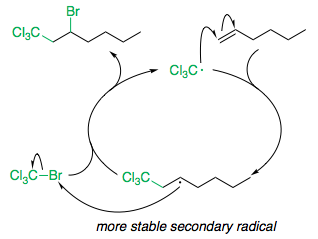