Chemoselectivity in synthesis of paracetamol

In the reaction below, why does acetic anhydride not react with the -OH group to form an ester instead? 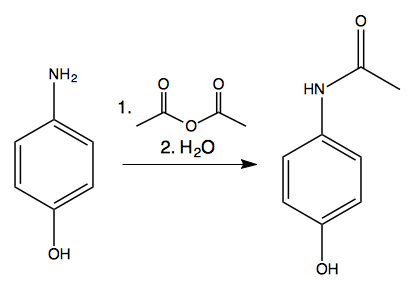 organic-chemistry synthesis carbonyl-compounds
Share
Improve this question
edited May 8 '16 at 16:06

The reaction is likely with one equivalent of acetic anhydride and under thermodynamic control.

Kinetically, the nucleophilic attack of phenol on acetic anhydride should be a lot faster than that of aniline. Aniline’s lone pair is taking part in resonance across the phenyl ring so it is barely able to attack. Phenol has two lone pairs on oxygen, though, of which only one is able to resonate with the aromatic system. Under kinetic control I would thus expect acylation on oxygen.

However, there is a second process which renders us thermodynamic control: The initial product can react with a second molecule in a transacylation reaction.

Both the oxygen of a free phenol and the nitrogen of a free aniline (the latter slower, but still) can attack a corresponding acylated atom. In overall thermodynamic stability, the acetylamine is more stable than the acetate (and is also kinetically more inert) so after equilibration has taken place the acetamide will prevail.

The amino group is more nuclephilic than the -OH. For this reason the reaction will proceed first with the amine. If an excess of acetic anhydryde is used the acetylation of both moieties would happen.

1
Why, during aspirin synthesis in acidic conditions, anydride carbonyl oxygen is protonated rather than salicylic acid carbonyl oxygen ?
7
Choice of base for malonic ester synthesis
5
Suggestion for a Synthesis of Paracetamol — plausible?
7
Evaluation of a synthesis from aspirin to paracetamol from this Nile Red video
2
Ester as a side product in the synthesis of bromoalkane from alcohol. Is it correct?
4
Synthesis of a weinreb amide from an acid
2
How is bromothymol blue synthetised?