Why does the graph of $\ln[\ce A]$ vs $t$ produce a straight line for the first order rate law?

Also why does the graph of $t$ vs $\frac{1}{B}$ produce a straight line for the second order rate law?

Assuming you do know what a differential equation is, we proceed!

For a first order rate law, the differential equation is something like:

Rearrange the concentration and time to get:

You now integrate both sides, with $[\ce{A}]$ as a function of $t$. This is a well-known integral, which is:

Similarly, the differential equation for the second order rate law is:

Rearrange the concentration and time to get:

And again integrate to get:

This all comes from the following Wikipedia page, which has a lot more details: Rate equation

]Wikipedia got it wrong for the 2nd order differential rate equation. It should be this:

Divide both [A]^2 and multiply by negative dt:

[A]^(-2) d[A] = -k dt ... This is a separable equation.(Actually, 0 order to third order and even three-halves order are separable differential equations.)

Integrate both sides with definite bounds.

So you redefine the axes with the vertical axis as 1 / [A], and the horizontal axis as time (t), and you expect a straight line if your chemical reaction is second order.

Theoretically, you should be able tabulate your data and calculate logarithms and inverses and make tables, and compare how well the scatter plots form a line to figure out which model is the best model. But, if you do not follow the reaction over enough time, then all the models could have good fits which is undesirable.

Not showing the work, but for the 1st order reaction, the integrated rate law is this:

Once you get your axes right in a table, you just format, you just do a linear regression in Microsoft Excel, QtiPlot, R, etc... to get the equation of your line to fit the model.

I hope I helped you understand this. 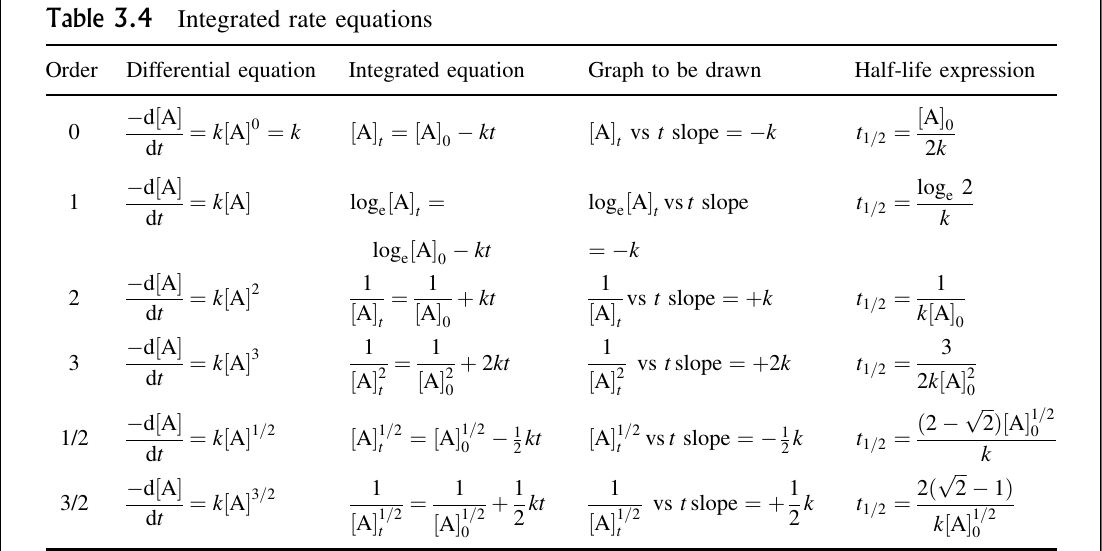 Here is how you integrate the first order rate law: https://www.youtube.com/watch?v=smcyZ_r0A88