Why is a rearrangement observed for the secondary alcohol but not the primary in these examples?

I am thinking that maybe only hydrogen shifts are possible and methyl shifts are not allowed in such situation? Is that the reasoning? but then again in the second example the bromide could shift to a secondary position after doing a hydrogen shift. 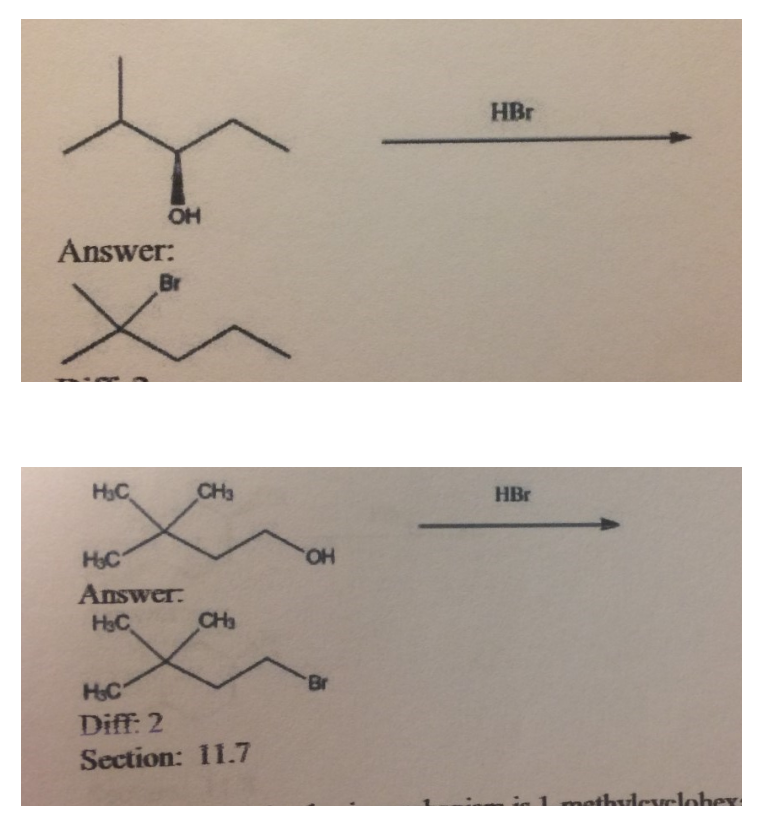 organic-chemistry reaction-mechanism alcohols
Share
Improve this question
edited May 6 '16 at 11:54

You need to consider the possible and plausible reaction mechanisms for both substrates. They are both nucleophilic substitutions in first approximation, so we need to decide whether $\mathrm{S_N1}$ or $\mathrm{S_N2}$ mechanisms are more plausible.

Primary electrophilic carbons are very likely to undergo $\mathrm{S_N2}$ reactions while $\mathrm{S_N1}$ is strongly disfavoured since primary carbocations are less stable than secondary or tertiary ones.

In this case, we have the possibility to stabilise the less stable second intermediate in the scheme shown below by a Wagner-Meerwein rearrangement. We can let both hydrogen or methyl migrate, but the hydrogen migration gives us the most stable carbocation (a tertiary one) so it will prevail. Multiple other migration paths will likely lead to minor products.

The primary carbon will not, as stated above, form a primary carbocation since it is too unstable. Hence only the bimolecular substitution will occur. If no primary carbocation is generated, no Wagner-Meerwein rearrangement can occur. And the mechanism of an $\mathrm{S_N2}$ reaction does not allow bromide’s (or anything else’s) migration.

The secondary carbon could undergo bimolecular substitution, too. The reaction rate will probably be slower than that of fragmentation and rearrangement, though, since the latter are unimolecular processes. And other shifts (e.g. methyl followed by hydride) are possible but again slower since you need to shift twice. All in all, a higher proportion of side-products may be expected.

In no case will the bromide shift after substitution; any shift would need to occur before.

4
Why are tertiary alkyl halides obtained in higher yield than secondary or primary during free radical halogenation of alkanes?
1
What is/are the product when 2,2-dimethylhex-5-en-3-ol reacts with Lucas reagent?
8
Is a sequence of two Wagner-Meerwein rearrangements possible?
1
Rearrangement of carbocation
7
What will be the possible major product(s) on heating this primary alcohol i.e. 9-fluorenylmethanol with (conc) H2SO4?
3
Can inductive effect be the sole driving force for carbocation rearrangement?
0
Is 1,3 alkyl shift allowed in Cyclobutyldicyclopropylmethyl Cation?
2
Stereochemical outcomes for hydrohalogenation when there is a carbocation rearrangement