Hund's rules basically state that we sould maxiumise $S$ and for a given value of $S$ maximise $L$. So let us take the case of Li. Li has 3 electrons, clearly the first 2 are in the $n=1$ state, with $S=0$ and $L=0$. For our remaining electron it must go into one of the $n=2$ states. No matter which state we put it in $S=1$, so we now use Hund's rule to maximise the value of $L$, which would indicate that we put it into the $p$ state giving $L=1$ rather then $s$ state giving $L=0$. But it does go into the $s$ state, which appears to violate Hund's rule. Why does it do this?

(p.s. my notation may be slightly out)

Hund's rules do not apply to different configurations that arise from the occupancy of orbitals with different energies.

You cannot compare these three terms with a term arising from a different electronic configuration, e.g. a $\mathrm{2p3p}$ configuration, which could give rise to a $^3D$ term which would be "more stable" on the basis of Hund's second rule.

The aufbau principle is much more important here. A simplified diagram would look something like this (don't judge me, it's not to scale and I have no time to calculate the exact splitting): 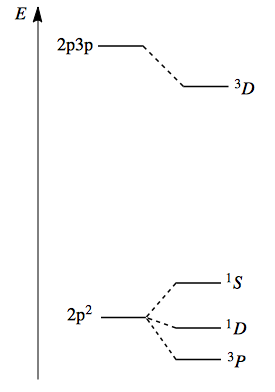 Just to show you why it doesn't make sense: with your lithium example, if you really wanted to, then you might as well promote the 2s electron to a 3d orbital, since that would give you a $^2D$ state. Higher $L$, wonderful! Why not go further and promote it to a 4f orbital, or a 5g orbital? We might as well ionise it...

Not the answer you're looking for? Browse other questions tagged electronic-configuration or ask your own question.

5
The violation of a certain rule or principle in the following electronic configuration
33
Is there an energy cost associated with flipping the spin of an electron?
6
How much energy does it cost to have electron configurations that are not in accordance with Hund's rules?
1
Doesn't the fact that the lone pair on the nitrogen in amides occupy a p orbital contradict Hund's rules?
6
Free radicals vs Hund's rule contradiction?
23
What is the physical basis for Hund's first rule?
8
Connection of term symbols with specific microstates for atomic carbon