Stereoselectivity of hydroboration of dihydrofuran

The above compound undergoes hydroboration. I originally thought that the $\ce{OH}$ group can attach to any of the 2 carbons plus there are 2 possible enantiomers at each position. So there should be 4 different products formed.

However the answer states that only below compound would be produced:

Why is this the only compound that is produced? Also if the $\ce{OH}$ group had to be attached to one of the carbons wouldn't it be more likely to attach to the carbon next to the oxygen since it will be more electrophilic?

Generally, the regioselectivity (and stereoselectivity, depending on the situation) of hydroboration reactions is determined by steric factors. This is a prime example of when it isn't.

Borane, $\ce{BH3}$, is electrophilic on boron because of the vacant p orbital (low-lying LUMO). It will therefore preferentially add to the alkene carbon that is more nucleophilic. The enol ether you have drawn is clearly nucleophilic on the carbon β to oxygen:

and consequently it is this carbon that the boron atom becomes attached to:

Also if the OH group had to be attached to one of the carbons wouldn't it be more likely to attach to the carbon next to the oxygen since it will be more electrophilic?

I suspect you need to check the mechanism of hydroboration-oxidation again. There is no attack of $\ce{OH-}$, or indeed any oxygen-based nucleophile, on an electrophilic carbon. The C-O bond is formed by migration of carbon from boron to oxygen. Which carbon is more electrophilic is inconsequential.

It is very common practice in organic chemistry to only draw one enantiomer when a racemic mixture is implied. The purpose of this is to save time: if you were discussing the diastereoselectivity of a particular reaction, you don't want to have to keep on drawing two enantiomers at every single step of the reaction.

Since attack from the top and bottom faces is equally likely to happen, an equal mixture of enantiomers is formed. As described above, the single enantiomer drawn therefore refers to a racemic mixture: 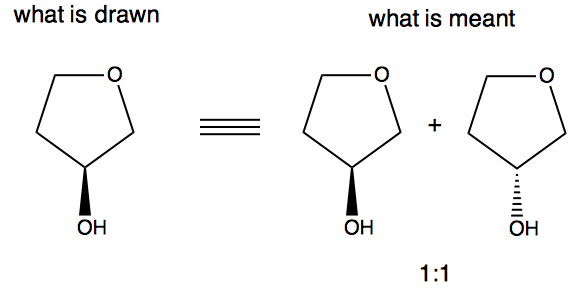 There is no diastereomerism present in this compound, but I would guess that the other reason why stereochemistry is indicated is to alert the reader to the fact that the product is chiral. Sometimes, this can be considered to be misleading. The most unambiguous way to indicate "undefined stereochemistry" is therefore using the wavy line as I did above.

22
What is the isomer distribution in monosubstituted fluorobullvalene?
1
Free rotation of sigma bonds; diastereomer formation; thermodynamic and kinetic products
4
How many stereoisomers are possible for hepta-1,6-diene?
8
Mechanism of substitution reaction with no change in stereochemistry
3
How can I rationalise the different basicities of cyclohexylamine, piperidine and morpholine?
9
Electrophilic substitution on disubstituted benzene rings
2
Alkene Electrophilic Addition Reaction Stereoselectivity When Two New Asymmetric Centers Form