Why is pyrimidine less basic than pyridine?

From Wikipedia's article on pyrimidine:

Because of the decreased basicity compared to pyridine, electrophilic substitution of pyrimidine is less facile.

But why is pyrimidine less basic than pyridine? Pyrimidine has two $\mathrm{sp^2}$-hybridised lone pairs available for protonation, compared with pyridine's one.

The problem is electronics. Nitrogen, being a rather electronegative atom, is able to draw the π electrons towards it well — to the extent that pyridine derivatives are termed extremely electron poor and thus very slow in electrophilic substitution reactions.

Going from pyridine to pyrimidine we need to double that. Thus, there is a perceived severe shortage of electrons in that ring since both nitrogens are trying to draw them towards themselves.

Now assume you protonate that species. We now have two nitrogens of which one is positively charged. Immediately, that positively charged nitrogen multiplies its electron-withdrawing force. Equally immediately, the other nitrogen feels electron density leaving its vicinity. The whole system is much less favourable than the pyridine system with only a single nitrogen.

In pyridine, the hybridisation of nitrogen atom is $\mathrm{sp}^2$. The electron pair on nitrohen lies outside the ring on an $\mathrm{sp}^2$ hybrid orbital and is available for protonation, making pyridine a basic heterocycle. 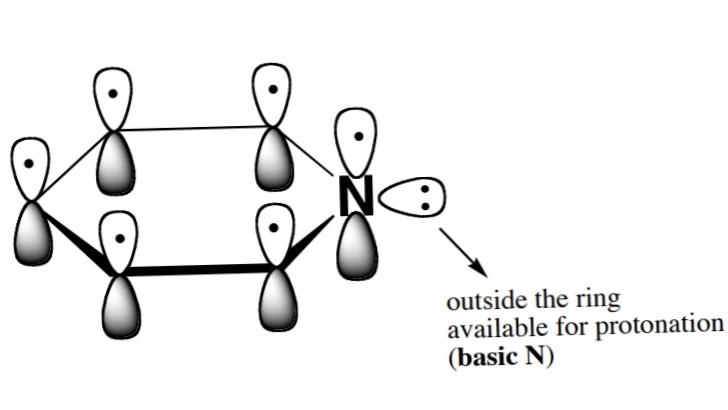 In pyrimidine, the nitrogen atoms are equivalent and $\mathrm{sp}^2$ hybridized. Both electron pairs lie outside the aromatic ring on $\mathrm{sp}^2$ hybrid orbitals. Both N are slightly basic. Pyrimidine is less basic than pyridine because of the inductive, electron-withdrawing effect of the second N atom. 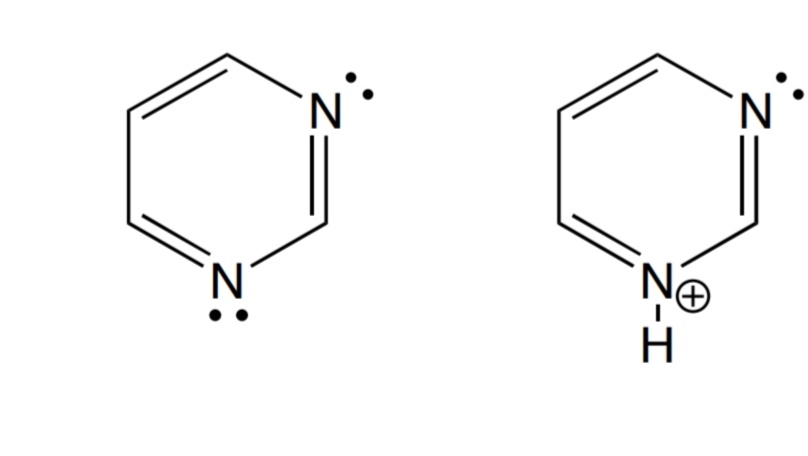 Not the answer you're looking for? Browse other questions tagged organic-chemistry acid-base heterocyclic-compounds or ask your own question.

18
Why does depurination happen at a higher pH (or under less harsh conditions) than depyrimidation?
16
Why is a hydroxyl group more activating than a methoxy group in electrophilic aromatic substitution?
4
pKaH of pyridine versus other imines
4
The pyridine/benzene stability 'paradox'?
1
Why is quinoline less basic than pyridine?
5
Why are amidines more basic than amines?
0
Comparison of basicity of o-phenanthroline and ammonia
1
Why is aniline more basic than pyrrole?
0
Comparing basic strengths between pyridine and 1,2-dihydropyrazine