What does reaction exothermicity say about the stability of molecules

If a reaction is exothermic it means that the energy state of the products is lower than that of the reactants so this will be the state that 'nature' will naturally strive for. Often you see that stability of molecules is argued in this way (e.g. in one of the answers here), saying that the higher the exothermicity of the decomposition reaction, the more unstable the molecule and thus the more unlikely that it will exist in nature.

My question is whether this reasoning is correct? 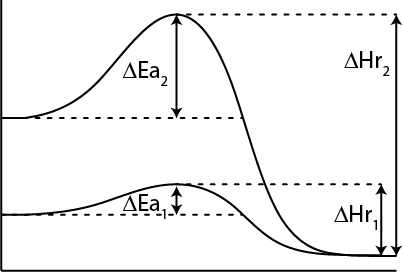 So my general question is: can reaction exothermicity be used to say something about the stability of molecules and what is the role of activation energy in this story?

Good question. There exists two types of stability - thermodynamic stability (determined by $\Delta G_{reaction}$, or $\Delta H_{reaction}$ approximately) and kinetic stability (determined by $\Delta G ^{\ddagger}$, or $E_{activation}$ approximately). The reactant compound in your first reaction is thermodynamically more stable than the second, since it sits at a lower potential energy, but it is kinetically less stable, since there is a smaller barrier for decomposition.

In constrast, when studying acidity and basicity of substances, it's common to justify reactions based on the "stability" of the acids/bases/conjugate species, but in this case, we're talking about thermodynamic stability, as it defines the acidity/basicity constants.

Not the answer you're looking for? Browse other questions tagged reaction-mechanism theoretical-chemistry energy stability or ask your own question.

3
Why does carbocation stability increase in the order 1°, 2°, 3°?
5
Activated Complex Products/Reactants
2
Endothermic and exothermic reactions
3
Relation between activation energy and temperature sensitivity
2
Can the reaction intermediate be lower in energy than the reactants or products?
1
Role of intermediate in determining the exothermic or endothermic nature of reaction
1
What is the definition of thermodynamic stability?