Evidently in the porphyrin around the iron molecule in heme there is a conjugated $\pi$-system which could account for the colour, but how exactly does this work? Also, what is the role of the metal ion (specifically $\ce{Fe}$) in the middle, its oxidation state, or the ligand, in changing/determining the colour in conjunction to that? Do the globin chains play any role in determining the colour (if so, how)?

Chlorophyll, for example, also has a porphyrin motif, but it is green due to having magnesium in the middle. Vitamin B12 is also intensely red in colour (according to Wikipedia). 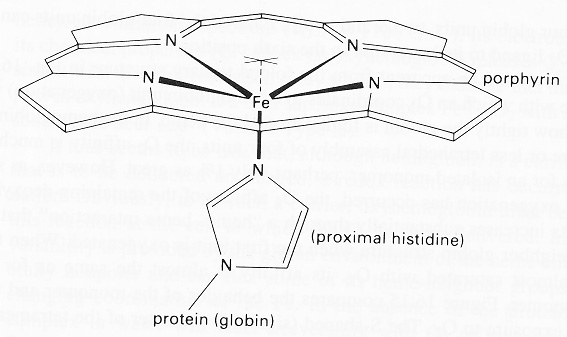 To understand the color change, it is important to think about the geometry of the molecule. When oxygen is not bound, the iron atom is in the +2 oxidation state. It's slightly too big to fit into the hole in the center of the plane of the immediately-surrounding "heme," so it actually rests just on top of the heme plane. Here is the molecular orbital of the iron species with no $\ce{O2}$ bound:

When $\ce{O2}$ does bind, the $\ce{Fe}$ and $\ce{O2}$ orbitals bond and their energies change. In particular, the $\ce{O2}$ $\pi$* orbitals interact with the $\ce{Fe}$ $\mathrm{xz}$ and $\mathrm{z^2}$ orbitals. A side effect of the $\pi$* accepting properties of all three of these ligands is that iron formally changes from being in the +2 oxidation state to the +3 oxidation state. You can think of it as having "given up" one of its electrons to the ligand via the ligand's $\pi$* orbitals. As a side effect of losing one of its outer electrons, the iron atom is now small enough to align perfectly with heme plane.

Almost counterintuitively, however, formation of oxyhemoglobin is actually energetically disfavorable, which can be explained by its color. Deoxyhemoglobin appears purplish-blue, meaning that it must be absorbing yellow light (lower energy),and is therefore more stable. Oxyhemoglobin appears red, meaning that it must be absorbing at blue-green light (higher energy) and is therefore less stable. This is actually vital to oxyhemoglobin's functionality. Because it is a higher energy, and thereby less stable structure, it easily releases the bound oxygen in the presence of hypoxic cells.

Not the answer you're looking for? Browse other questions tagged organic-chemistry biochemistry molecular-orbital-theory color structural-biology or ask your own question.

2
Why is the iron(II) on the heme molecule depicted as having 6 electrons in its 5 d non- and anti-bonding orbitals?

3
How does dimethyltryptamine cross the blood-brain barrier?
11
How hydrate isomerism results difference in colours?
23
Why is there a difference in the colours of K₂Cr₂O₇ and K₂CrO₄?
1
Transition Metals colours and electron absorbtion
7
What could these letters "S" in red circles mean in a biochemical diagram?
1
How does CO2 'dissolve' in water (or blood)?