I know that this compound is named propanoyl chloride.

However I am not sure what to do when here are multiple -COX groups and they are of the highest seniority. There are two cases, when they are the same: 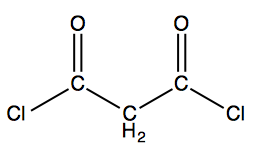 And when they are not:

For the first case I think it is called propanedioyl chloride, but I do not know what to do for the second. Is one of them cited as a prefix and if so which one?

Systematic names for acyl halides from suffix acids are formed according to Subsection P-65.5.1.1 of the current version of Nomenclature of Organic Chemistry – IUPAC Recommendations and Preferred Names 2013 (Blue Book).

P-65.5.1.1 Acid halides in which hydroxy groups of all acid groups expressed as the suffix denoting the principal characteristic group (carboxylic, sulfonic, sulfinic, selenonic, etc. acids) have been replaced by halogen atoms (F, Cl, Br, and I) are named by citing the name of the acyl group (…) followed by the name(s) of the specific class(es) as a separate word(s), in alphabetical order, each preceded by a multiplicative prefix, as needed.

However, note that various carboxylic acids were often given trivial names (e.g. reminiscent of their animal or vegetable origin), which are retained for general nomenclature (including functionalization).

Not the answer you're looking for? Browse other questions tagged organic-chemistry nomenclature carbonyl-compounds or ask your own question.

12
Difference in acid strength of oxalic acid and malonic acid

10
Functional group naming order?
5
Phenyl or benzene when naming compounds
8
Nomenclature of alkoxy and halo groups
6
Naming compounds with an OX group
1
Difference between isopropyl and isobutyl
3
How would the "-COOCl" functional group be named?
5
Is there a systematic naming system to name carbonyl derivatives?
2
IUPAC nomenclature for tricarboxylic acids
0
IUPAC nomenclature of cycloalkadienes with substituents and alkenes on the same carbons