When did the atom Theory Become indisputable?

We know that the Greeks were the first scientists (or better, philosophers) to introduce the idea that matter is made up of little “chunks”, and they named these chunks “atoms”. This idea that matter comes in discrete small pieces was termed wrong and right over centuries when John Dalton, in the 19th century, constructed a theoretical framework in which he could explain in an elegant way the work of scientists such as Joseph Priestley and Antoine Lavoisier on qualitative and quantitative properties of matter and its transformations. The framework which John Dalton used to better understand the work of other scientists had in its core the “language” of atoms, that is, he used the concept of atoms to explain, for example, why reactions only occurs if we have quantities “in proportion”. Note that the work of John Dalton doesn't proof that atoms are real, it only shows that thinking of matter in terms of atoms is a suitable way to understand the results coming out of experiments. Scientists only proved that atoms are real at the beginning of the 20th century, and that discovery gave birth to Quantum Mechanics.

Now comes my question: When did scientists prove that molecules “are real”? In other words, what is the history of the discovery of (the shape of) molecules?

Scientists have been playing around with toy models of particles for a long time but only a short time ago IBM researchers managed to “take a picture” of an actual molecule, and its configuration matches exactly the models we've been using for a long time, for example this pentacene molecule: 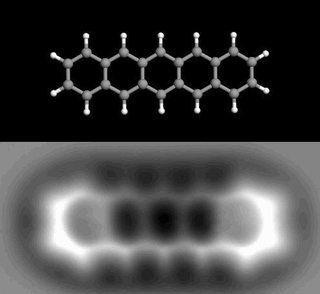 When did we first learn that molecules have a “geometry”? That is, an exact arrangement in space?

molecules bond history-of-chemistry
Share
Improve this question
edited May 18 '13 at 18:22

Short Answer: Henry Moseley provided the first experimental evidence for the nuclear model of atoms through X-ray observations in 1913.

Proving something is a rather nebulous task when there is no judge or jury and consensus is arrived at gradually over a century rather than instantaneously. Many scientists would consider the atom "proved" decades apart.

Avogadro was the first to distinguish atoms from molecules, which alleviated much confusion regarding atoms and allowed quantitative description/experimental evidence as relating to Advogadro's number (a mole). That was during the early decades of the 1800s (19th century)

Various scientists became convinced at various times over the next century.

Take Max Plank for an example. Around 1898 Plank became persuaded that the molecular approach was the only way forward for physics. He had formerly ascribed to the "pea soup" model where there were not discreet atoms. It was the molecular approach that allowed Plank to discover energy level quantization that is the foundation for quantum mechanics. E=hv

Lewis dot structures were some of the earliest electronic approaches to molecular geometry (circa 1910), but long before that there was an understanding of basic molecular geometries as demonstrated in the correct postulation of Benzene's hexagonal ring structure in 1865. Carbon was known to form 4 bonds with other carbons in the late 1800s. Linus Pauling was the first to calculate bond angles based on quantum mechanics in 1931.

Working in the domain of the kinetic theory of gases, it was Einstein who gave the first estimates of the size of of atoms and molecules.

From INVESTIGATIONS ON THE THEORY OF THE BROWNIAN MOVEMENT:

In this paper it will be shown that according to the molecular-kinetic theory of heat, bodies of microscopically-visible size in a liquid will perform movements of such magnitude that they can be easily observed in a microscope, on account of the molecular motions of heat. It is possible that the movements to be discussed here are identical with the so-called Brownian molecular motion however, the information available to me regarding the latter is so lacking in precision, that I can form no judgment in the matter

Jean Baptiste Perrin was later awarded the Nobel Prize for his confirmations. I quote from the award ceremony speech:

It may perhaps be said that in the work which we have just summarized Perrin has offered indirect evidence for the existence of molecules. Here, follows a direct evidence. Microscopic particles in a liquid are never at rest. They are in perpetual movement, even under conditions of perfect external equilibrium, constant temperature, etc. The only irrefutable explanation for this phenomenon ascribes the movements of the particles to shocks produced on them by the molecules of the liquid themselves. A mathematical theory of this phenomenon has been given by Einstein. The first experimental proof of this theory was given by a German physicist, Seddig. After him, the problem was taken up by two scientists simultaneously. One of them was Perrin; the other Svedberg. I have to speak of Perrin only. His measurements on the Brownian movement showed that Einstein's theory was in perfect agreement with reality. Through these measurements a new determination of Avogadro's number was obtained.

This is hard to answer. The concept of atoms and molecules was very fruitful in the 19th century. It could be used to prove that there were only three isomers of chlorobenzene, just for example.

With the turn of the 20th century and the working out of kinetic theory, molecules became more "real". But it was not until late in the 20th century that molecules were first "seen" using a scanning electron microscope. You can look that up in Google.

By the way, I personally feel it is wrong to attribute the notion of atoms to the Greeks. Things only become "discovered" when the idea catches hold and informs ongoing research. That would make Dalton the "discoverer" of atoms. Just my view, others may differ.

Not the answer you're looking for? Browse other questions tagged molecules bond history-of-chemistry or ask your own question.

7
How did Halogens become known as Halogens? They are not the only elements that form salts!
0
How did chemists in the 18th century learn that magnesium gain mass when it's burned?
4
Detecting a gas molecule moving through a small pinhole
9
When did the realistic typesetting of chemical structures start?
7
Trying to understand the contradiction in the data of Proust/Dalton/Berzelius vs Gay-Lussac
3
Breaking degeneracy in phosphorus pentachloride