Regioselectivity in radical chlorination of a carboxylic acid

From an online textbook, the first step in the preparation of an amino acid:

Can we be sure that the chlorine will connect exactly at that spot, in the alpha-position? Won't we get an acyl chloride instead? Or a molecule where Cl is connected in the beta-position, or further down the line?

I am going to say: no, this does not work in practice. In fact it does not even work in theory.

In simple theory you would say that that the α C-H bond is the weakest because the resulting radical is stabilised by conjugation into the C=O. But under radical conditions, we don't observe α-chlorination in the lab. Is there a better way to explain this?

The problem is twofold. Firstly, the chlorine radical, $\ce{Cl.}$, is much less stable and therefore extremely unselective in radical chlorinations. In physical organic chemistry, we quote something called the Hammond postulate, which says that in this case, the transition state for hydrogen abstraction resembles the starting material more than the product. Therefore, the stability of the product does not significantly affect the activation energy, and the rate, of the hydrogen abstraction.

On top of that, it is what we would consider an "electrophilic radical"; it has a very low-energy SOMO, and therefore has a tendency to abstract a more electron-rich hydrogen atom. Essentially, it means that the radical behaves more like an electrophile than a nucleophile. In the transition state for hydrogen abstraction, the chlorine wants to have a significant build-up of negative charge on itself (remember, the product of hydrogen abstraction is going to be $\ce{HCl}$). It therefore goes for the hydrogen that is most willing to give it this negative charge, and that is the most electron-rich hydrogen atom.

Consider the radical chlorination of propionic acid, i.e. $\ce{R} = \ce{CH3}$ in your diagram above. 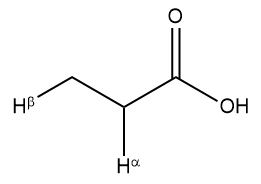 The α-hydrogen, compared to the β-hydrogen, is comparatively electron-poor because of the electron withdrawal by the $\ce{-COOH}$ group. So, it turns out that the rate of abstraction of the α-hydrogen is much slower: $k_\alpha/k_\beta = 0.03$ (Moody & Whitham, Reactive Intermediates, p 12). Here's an article which discusses the selectivity observed in the chlorination of propionic acid under different conditions: Tetrahedron, 1970, 26, 5929.

Radical chlorination shows a substantial polar effect. Positions substituted by EWG [electron-withdrawing groups] are relatively unreactive toward chlorination, even though the substituents are capable of stabilizing the radical intermediate. [...] Because the chlorine atom is highly reactive, the reaction is expected to have a very early TS [transition state] and the electrostatic effect predominates over the stabilizing effect of the substituent on the intermediate. The electrostatic effect is the dominant factor in the kinetic selectivity of the reaction and the relative stability of the radical intermediate has relatively little influence.

As an example, they use the chlorination of butyronitrile, which is the same as propionic acid except that the EWG is now $\ce{-CN}$ instead of $\ce{-COOH}$:

As @Loong mentions in the comments, in the specific case of propionic acid, there is a further problem: there are three β-hydrogens for it to abstract, and only two α-hydrogens. Therefore, even in the absence of everything else I have described, we would expect there to be 1.5 times as much chlorination at the β-position. This certainly does not help at all with the selectivity! The importance of statistical factors is most clearly seen in the radical chlorination of simple alkanes, where all the hydrogens are pretty much similar. I shan't go into detail here, but you can look at this answer (by Loong again), and there are examples on Clayden 2nd ed., pp 987-8.

If you wanted to selectively chlorinate propionic acid at the α-position, you would use a polar mechanism that goes via the enol. The paper above has some examples of conditions that work. All of them involve suppressing the radical reaction by adding radical scavengers.

Note the $h\nu$ in the reaction. It is a radical reaction. Irradiation will cleave the $\ce{Cl-Cl}$ bond and yield chlorine radicals ($\ce{Cl*})$. These will abstract hydrogen atoms (not protons) from the carboxylic acid to form a carbon centered radical (and $\ce{HCl}$). The favoured and position for this radical is the $\alpha$ carbon, where the radical is stabilized by interaction with the $\ce{-C=O}$ bond.

Chances are even better in the presence of reagents that would facilitate the formation of an acid halide, as mentioned in the question. Catalytic amounts of phosphorus might be sufficient. This type of transformation, usually performed with bromine, is known as the Hell-Vollhardt-Zelinsky reaction.

The $\sigma _{C-H}$ bond $\alpha$ to the carbonyl is going to be the weakest bond in terms of homolytic cleavage.

The $\ce{C-H}$ bond is weakened due to hyperconjugation. Hyperconjugation goes beyond the "intro organic" explanation of "adjacent $\ce{C-C}$ bonds stabilizing carbocations." Essentially, electron-rich $\sigma$ bonds, or bonds where the electrons are fairly central within the bond (in this case, the $\ce{C-H}$ bond) will donate electron density into an adjacent empty or partially-empty $\pi$ or $\pi ^\star$ orbital. This will strengthen the $\ce{\sigma _{C-C}}$ bond of the two adjacent carbons, but will weaken the $\ce{\sigma _{C-H}}$ by reducing electron density in its $\sigma$ bond and will also slightly lower the bond order of the carbonyl due to donation into $\pi ^\star _{C-O}$.

In the image below, you can see the molecular orbital diagram for hyperconjugation between a $\ce{C-H}$ bond and an adjacent alkene. 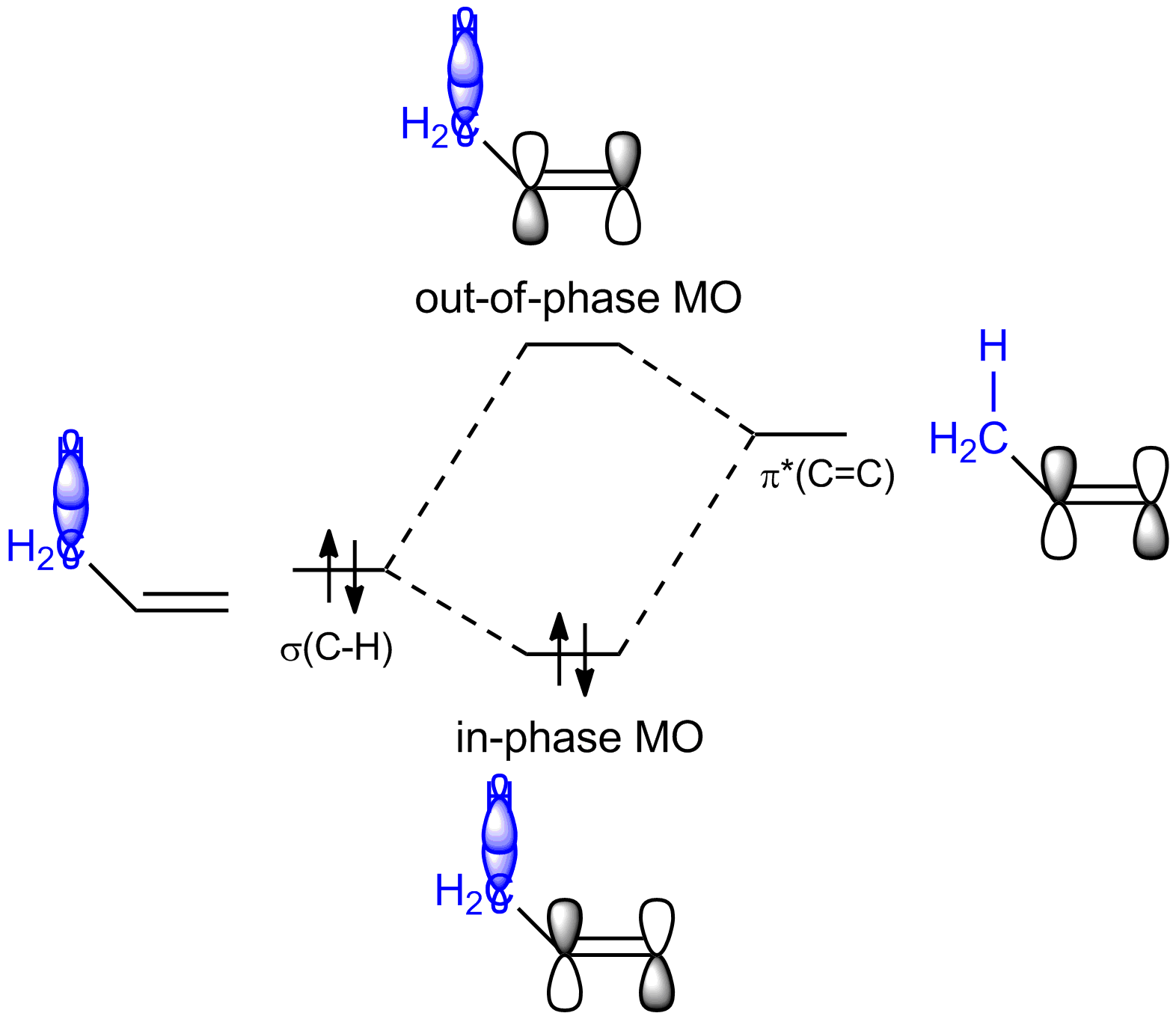 Because some electron density is lost from $\ce{\sigma _{C-H}}$, it becomes weaker and is, therefore, the easiest bond to break by the resultant chlorine radical.

9
What is the major product on chlorination of 2-methylbutane?
1
Electrophilic nature of bromine free radical

12
What's the mechanism of the reaction of (E)-methyl 3-(furan-2-yl)acrylate in acidic methanol?
7
Mechanism of Grignard addition to carbonyls
7
Predicting the products of the radical chlorination of propane
7
Why is free radical chlorination exothermic whereas bromination is endothermic?
3
Conjugate addition vs Electrophilic addition
4
Regioselectivity in iodolactonisation of γ,δ-unsaturated carboxylic acid