I keep trying to figure out how current is conducted through an electrolyte but all I can find are BS half answers. They say the ions conduct, but the specifics are poorly explained or absent. I understand that if you, for example, put sodium chloride in water it will disassociate into positive sodium ions and negative chlorine ions, and that an electric field would cause the ions to move, allowing a current to flow. But what happens once the charges get to the electrodes? Obviously, they can't just stay there in elemental form stably. I would expect the sodium, once given an electron, to be looking for a way to give that electron back. Would it cause the water to split into hydrogen gas and hydroxide ions? On the chlorine side, would the chlorine atoms simply turn into chlorine gas. If this is all correct, it seems one would end up with sodium and hydroxide ions. Does it still conduct then? If so, how so? And don't you have a solution of sodium hydroxide? It seems this process necessitates that the water be split. Is there any salt or other compound which would act similarly but not result in electrolysis (just conducting)?

electrochemistry ions
Share
Improve this question
asked May 13 '13 at 7:27

An approach using a classical model of electron flow

You can think of an electron flowing through a medium as analogous to a pinball bouncing around a pinball machine. The electric (potential) energy difference driving the displacement of the electron is analogous to the gravitational energy difference in the pinball machine. Now consider two pinball machines with differing numbers of obstacles to a falling pinball. The time it takes for a pinball to reach the bottom in each machine would be different by virtue of these obstacles (on average, taking more time with more obstacles). Similarly, the flow of electrons, I, in the presence of an electric potential, V, is higher for media with less resistance, R , to electron flow. We can use this model (Drude see below) to understand Ohm's law: $$I = \frac{V}{R}$$ The observation that electrons flow more readily through electrolyte solutions than non-electrolyte solutions indicates that solutions with charge carriers reduce the resistance of the media. A better understanding of why this is true at a molecular level will require a more in depth look. Notice, though, that we now have answers to your good questions!

"What happens once the charges get to the electrodes?"

The sodium stays in solution as an ion, but the hydrogen ion (from the hydrolysis of water) can be reduced to form hydrogen gas at the cathode, and the chlorine ion can be oxidized to form chlorine gas at the anode. Electrons can be passed through the solution as solvated electrons under some circumstances, but this is unlikely due to the larger energy barrier to this process (around 3 eV). With sufficient energy, these electrons (called solvated electrons) flow through metal and solutions. The resistance to electron flow in metals is much less than in electrolyte solutions, though.

"Would it cause the water to split into hydrogen gas and hydroxide ions?" and "I would expect the sodium, once given an electron, to be looking for a way to give that electron back."

Any additional redox reaction would require electric potential. You mentioned the splitting of water or the formation of sodium metal. This would not occur according to the standard electrode potential unless the electric potential provided is sufficiently high to overcome the "uphill" energy barrier and as you mention electrolysis would be involved.

In 1900, Paul Drude used the following schematic of a lattice of metal ions sitting in a sea of electrons to derive a relationship between electron flow and electric potential applied. 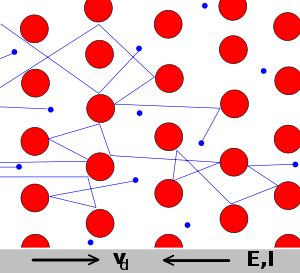 A metal's electrical resistance, R, (as seen in Ohm's law above) should take the form:

where, $m$ is mass of electron; $n$ is number density of electrons; $q$ is charge of electron and $\tau$ is the mean free path. While this classical model does not explain the resistances for all substances perfectly and quantum mechanics can be used to do a better job, it does suggest that if the mean free path for electron flow is increased and the assumptions of the model are valid, the electrical resistance of the media should be reduced.

One way to understand why there is lower electrical resistance (higher electrical conductance) in aqueous solutions of electrolytes is that there is less water in the way of the Drude ion lattice! In other words, in the limit that the solution is a molten salt, we approach a Drudian model. As you add more and more molecules of water to this model, you are reducing the mean free path of the electron and increasing the resistance of the solution.

Actually if you look at electroplating you would see that the metal ions once give an electron at the cathode do turn into elemental metals and plate the electrode. This is how you electroplate things. You can't conduct forever as eventually you will deplete the ions in the solution, much like a battery will run out of charge if it is driving a current rather than the reverse.

If you use molten salt, you will get sodium at one electrode and chlorine gas at the other. If you use a solution you will either get O2 and H2 at the two electrodes, or the ions precipitating out depending which reaction is more favourable.

Not the answer you're looking for? Browse other questions tagged electrochemistry ions or ask your own question.

0
How do electrolytes work?

3
Electrolysis: Water to Hydrogen gas?
18
Can an aqueous solution conduct electricity forever?
1
Does the speed of an ion affect the current that can flow through a solution?
2
Are Na and Cl ions from NaCl in water separate charged particles?
0
Writing Ionic Equation
1
Supporting electrolytes and increased conductivity?
1
Do ions still "conduct electricity" if a physical connection made by aqueous electrolytes between the anode and the cathode is nonexistent?