Is the phenyl cation or ethynylium more stable?

I recently gave an exam and I received an interesting question to which I believe the answer is wrong.

Given two compounds, a benzene molecule with carbocation at one of its constituting carbon atoms and an ethyne carbocation. Now according to me even though ethyne carbocation is pretty unstable due to the sp hybridized carbon, but if a charge is placed on a carbon in the benzene ring, too much strain is caused on the ring which destabilizes it more. I believe that the stability of the ring is a more dominating factor when carbocations are involved, but the answer was in favour of the ethyne carbocation. 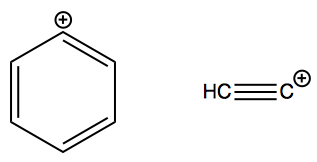 Could someone please clear this doubt if whether any other factors were taken into consideration or my basic premise is wrong?

As trivial as this question might seem, it is not. It should certainly never be asked in at an exam level lower than basic quantum chemistry.
Any of the tempting explanation schemes will certainly fail. A bonding picture in the Lewis formalism is almost impossible; hybridisation descriptions in these compounds is extremely complex.
As a general tip: The smaller the molecule, the more complicated is the bonding.

This question seems so simple, yet is incredibly complex. As a quantum chemist, I see any molecule as stable if it is an energy well (stationary point) on the potential energy surface (and this might already be a simplification). This concept does not help in any way when you want to compare stabilities, because it is just one property of a particular arrangement of nuclei in a particular state.

There is no such thing as absolute stability. We cannot measure it. It is an abstract concept, that we like to think that we understand it. An example from the real world: ice is stable below 0 °C and vapour is stable above 100 °C. Yet ice is not more stable than vapour.

Comparing stability, we always need a framework of multiple variables or constants and a reference point. It is therefore often assumed, that the boundary conditions are the same (exactly). Even on a purely theoretical level this it is extremely difficult to find these exact boundary conditions. Sooner or later you have to introduce approximations, which eventually crash your system, especially regarding the reference point.

It is difficult, but not impossible. In order to compare the relative stability of those two cations we can assume a hypothetical hydride transfer between them, hence building a closed reference frame. In computational chemistry we use the concept of isodesmic reactions for such purposes. It is obviously not free of any bias and a complete hypothetical, but it can give us some more insight.
In this case we can propose the following hypothetical isodesmic reaction:

Note that the number of bonds of the same type are the same on each side are equal. Close enough at least. One could argue, that we break a hydrogen sp²-carbon bond and form a hydrogen sp-carbon bond, and vice versa, therefore not having the same types of bonds on the left and right side. But, this is probably as close as we can get.
Having set up a concise set of parameters, we can now go ahead and perform a few quantum chemical calculations. I decided to use my personal standard: DF-BP86(D3BJ)/def2-SVP level of theory.

And we run into more problems

The singlet, closed shell molecules benzene (despite aromaticity) and acetylene are no problem. But when we come to the cations, things get interesting.

The phenyl-cation does not propose a big threat either, it is big enough to compensate the empty orbital in the σ- and π-system.

The high symmetry of the acetylene molecule make it impossible to treat on this level of theory. The linear form is - by my definition - not stable. At least not at this level of theory, at least not in the singlet state. What we do need is a multi-reference method like CASSCF at least. And then we still don't know which state is preferred and if we can still use our proposed hypothetical reaction. Because if the spin state is different on either side, the whole thing falls apart.

Nevertheless while we're already at it, let us look at some of the results and clear up some misconceptions.

Upon ionisation the system needs to compensate the change with a change in geometry. This is a purely electronic effect. In benzene all carbons are trigonal coordinated, quite nicely having three sp² hybrid orbitals; it is one of the very few examples, where symmetry dictates that. Removing a hydrid ion also means removing electrons from such an orbital, freeing up more stable s-character. As a result the bond angle widens to accommodate more s-character in the carbon-carbon bonds. Now this leads to a visibly distorted geometry - a delicate equilibrium of multiple factors.

The π-system remains largely undisturbed. The σ-bonds compensate almost completely for the change. The cationic carbon is now better described as being between linear and trigonal, hence having hybridorbitals between sp and sp².

Acetylene and the Ethynyl carbocation

Acetylene is a wonderful molecule by itself. It has extremely high symmetry, which is quite rare for four atoms. With that comes a large number of degenerate orbitals. And a highly complicated bonding situation.
You might want to regard the carbons as having sp-hybrid orbitals, and that is fine as an approximation, but the deeper you dig, the creepier it gets. (Also see Bent's rule.)

Disturbing this molecule in any way, results in breaking the symmetry. The linear version of HCC+ still has high symmetry and now we have a problem. Upon removal of the hydrid ion, the remaining electron density will try to use as much s-character as possible. As a result part of the s-character is tried to be redistributed into the π-system. These orbitals now do not match the spacial symmetry anymore and the molecule is not stable in its linear form in the singlet state. This is not the whole truth though, but it gets much more complicated and this will certainly be too much for this answer.

A stable structure on this level of theory in the singlet state is an almost three-membered ring. It is probably best to think of it as a protonated dicarbon. All bonds are elongated compared with acetylene.

Since we have a significant different bonding situation now, the previous assumptions of the same type of bonds left and right break down and we can no longer compare these two molecules in the given reference framework.
(Without respect for actual science, we could still do it. Then we would know that the left side of the equation is about 600 kJ/mol more stable than the right.)

The phenyl-cation might be stable, it is a local minimum at DF-BP86/def2-SVP, while the acetylene-cation does not exist. The HCC-cation is better thought of as a protonated dicarbon molecule.

If I understood you correctly, then your assumption, that the "strain" on the ring is bigger than the instability of the orbitals in the acetylene cation, is indeed wrong.

Not the answer you're looking for? Browse other questions tagged organic-chemistry stability hybridization carbocation or ask your own question.

11
Which is more stable? A phenyl carbanion or a disubstituted vinylic carbanion?
7
Addition of HBr to Vinyl bromide
28
Which of the following is the more stable carbocation?
3
How to determine the reactivity of a set of compounds that may undergo nucleophilic substitution?
11
Is the ethyl cation really more stable than benzylic and allylic carbocations?
25
Is the t-butyl carbocation more stable than the benzyl carbocation?
13
Are carbocations necessarily sp2 hybridized and trigonal planar?
12
Friedel–Crafts alkylation of benzene with tetrachloromethane