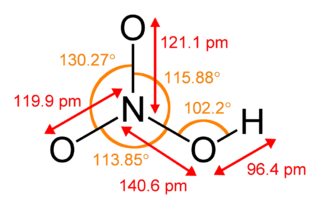 I can't understand how can both be simultaneously correct since the resonance hydrid should have same two $\ce{N-O}$ bond lengths (other than $\ce{N-OH}$ one). How is it correct or is the source itself wrong?

In addition to permeakra's comment, I want to add the following thoughts:

1) How were these bond lengths determined?

Were these values determined computationally? If so, what is the standard error in the computational method uses? In other words, is the difference between the two values within the error of the method, and thus the difference is not significant. Additionally, a computational method operates on single molecules "in the gas phase", and there might be just enough interaction between the hydrogen atom and one of the other oxygen atoms. This interaction would also explain the disparity in bond angles:

Were they measured experimentally, for example from x-ray crystallography? If so, then dissymmetry arising from a preferential crystal packing arrangement can lead to differences. In particular, in the solid state, the position of the hydrogen atom can make a big difference in preferential hydrogen bonding, either intermolecularly or intramolecularly. For units like the following hyrogen-bond dimers, the hydrogen bonding could lead to dissymmetry between the N-O bonds.

They do, even in the solid state. Thus, an x-ray crystal structure has error its measurements as well. Again, is this difference in bond lengths within the experimental error?

Not the answer you're looking for? Browse other questions tagged bond resonance covalent-compounds or ask your own question.

2
Nitric acid vs. chloric acid strength
5
Using MO theory, give an explanation for the C-C bond length in cyanogen
12
Why is the original Pauling's theory of resonance that uses superposition of wavefunctions not used today?
0
Strength of substituted Carbon Double Bonds and C-halo bonds
6
What is the meaning of "charge separation" in resonance?
8
Why is there only one bond length for sulfur hexafluoride?
0
Is there really any difference between Resonance and Mesomeric effect?