I'm quite familiar with E1/E2 reactions and usually use those ideas to explain elimination reactions, however I came across a reaction which was a bit different (in the sense it isn't E1/E2) but still an elimination.

Looking at this reaction I ruled out an E2 type elimination because there's no axial hydrogen which is trans to the bromine group, so something else must have happened here. I drew out the lowest energy chair conformation ('locked' in that conformer because of the t-butyl group) that would react to help me understand what happened and this is what I came up with (excuse the poor chair drawings): 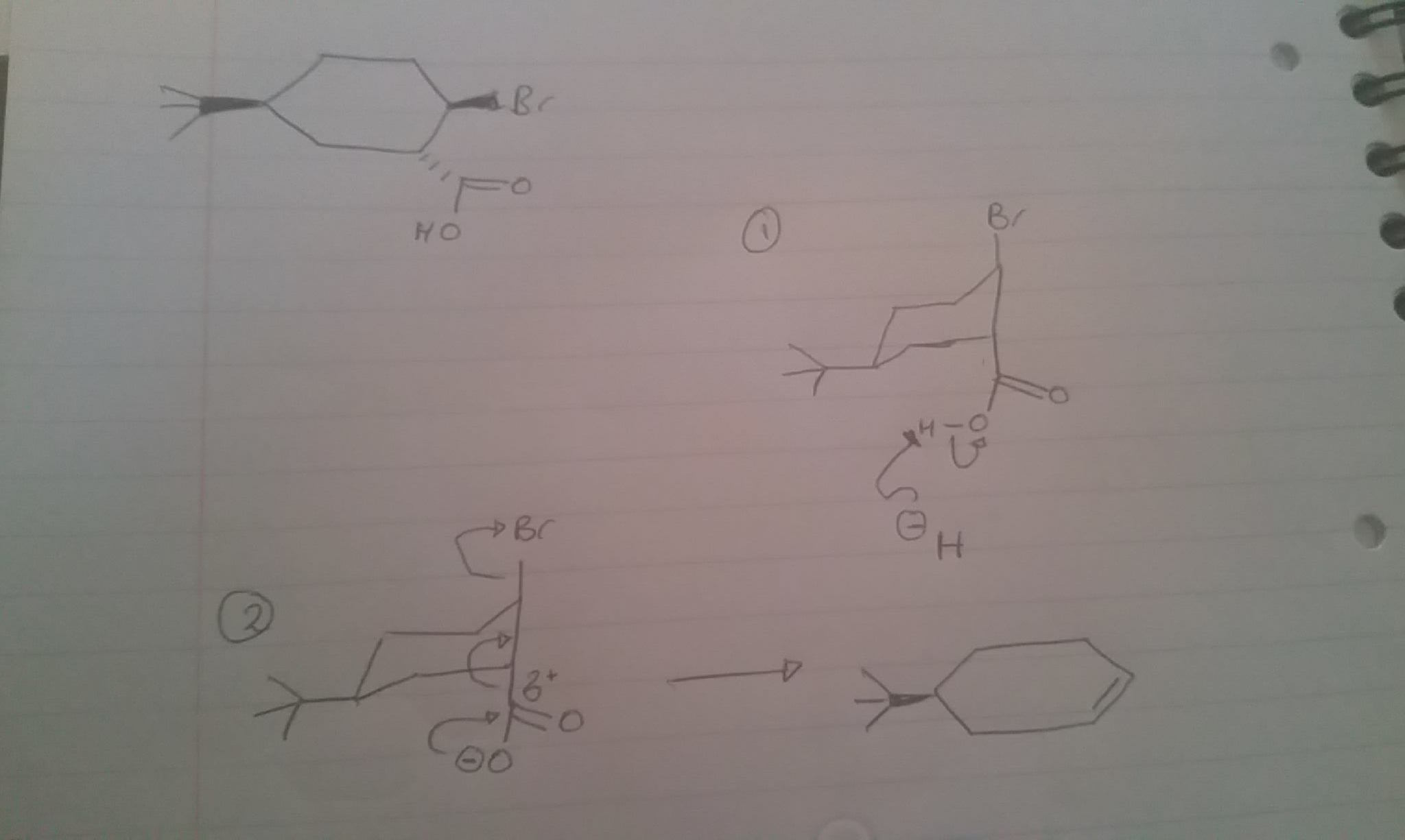 I know hydride is a very strong base and the first step would be deprotonation of the carboxylic acid group (Due to it being the most acidic proton). However after this, mechanistically I wasn't so sure what would happen and how it would happen. My thinking was the oxygen which is now quite charged would push the electron density in towards the carbonyl carbon, and hence the bond would break (between the carbonyl carbon and the cyclohexane carbon). That would form a double bond, and $\ce{CO2}$ and bromide would leave. Is this realistically a correct explanation for what is observed? Also what kind of reaction is this? I haven't come across it before during the usual E1/E2 reactions. Are there any other examples of similar elimination reactions?

This type of reaction falls into the category of Grob fragmentation [Wikipedia]. Conceptually, it is very similar to an E2 mechanism, where an anti-periplanar pair of electrons flows into the sigma anti-bonding orbital of a carbon-leaving group bond resulting in a new pi bond and cleavage of the carbon-leaving group bond. The primary difference between these two is that in an E2, that anti-periplanar pair of electrons comes from deprotonation, and in a Grob fragmentation, the electrons are from breaking some other sigma bond other than a C-H bond.

A syn-oriented version of this reaction can be seen in the generation of benzyne.

Also, decarboxyation is very common with a beta-carbonyl group. This doesn't exactly follow the Grob pattern, because there is no leaving group. The carbonyl plays the role of electron sink.

Not the answer you're looking for? Browse other questions tagged organic-chemistry reaction-mechanism carbonyl-compounds cyclohexane or ask your own question.