Is copper an element or molecule? [closed]

I am not sure is copper present in form of molecules? Can someone please describe about it? I searched on Internet and also asked many people but am not getting any clear answer.

Metals form metallic bonds, which are a thing of its own. An easy way to rule out molecular bonding is if the boiling point is high; most metals have high boiling points, because metallic bonding is much stronger than the forces between individual molecules (such as $\ce{O_2, CH_4}$) that hold them together.

Well, if I were asking about the bonding of an element, I'd specify the temperature and pressure (ranges) I was interested in. Ground state. STP. Copper is metallic. I won't go into the discussion about whether a crystalline metal is or is not covalent. A crystalline metal by definition shares electrons broadly, and shouldn't be characterized as having covalent bonds, but that's not necessarily a clear-cut issue. At STP it (the pure element) exists as face-centered-cubic crystallites. Some natural crystals of copper are known. It (the metal) is known to exist naturally, but by far most copper on Earth is compounded in minerals (ores). I found one reference to Cu2 existing in the vapor state (there could be many more, IDK). This would be a molecule. All molecules are composed of atoms. All atoms are elements. Molecules are covalently bound atoms. Molecules are generally considered finite assemblies of atoms. Is copper an element? Yes. Can copper exist as a molecule? Yes. What is the form of the element at stp? Metal. (STP = standard temperature and pressure) 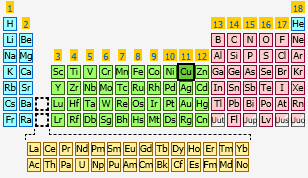 Copper is a metal, not a molecule. Copper's makeup is shown in the diagram below, 29 protons and 35 neutrons with one electron in the outermost ring.

16
Metal Compounds that bond covalently
13
Do there exist metals that are composed of molecules?

6
How is it possible to distinguish antimony from lead?
1
Pure substances have only one kind of atom
10
Elements which do not form oxides
11
Elements other than carbon that can form many different compounds by bonding to themselves?